In August 2013, I suffered a debilitating back injury. I was in a lot of pain, and left unable to bend or sit which limited my mobility greatly. With a compressed vertebral disc in my lower back, it has taken months of rehabilitation with spinal manipulations and muscle work to get me where I am today: still prone to flare-ups of discomfort, but much more mobile, and starting to get my fitness back. In October 2013, I was supposed to have been hiking a 4-day track through the Southern Alps in Fiordland, but still unable to sit for any length of time, I couldn’t contemplate the 8-hour drive to get there, never mind the hiking and camping at the other end of it. I was gutted, and now, coming out the other side, I can admit to how much my reduced mobility and flexibility was getting me down. Since the turn of 2014, despite some temporary set-backs, I have been trying to reclaim my fitness in preparation for hiking the Kepler Track in March. The Port Hills and Banks Peninsula to the south of Christchurch is riddled with walking tracks which have allowed me to start working on my endurance, and I’m finally starting to feel like myself again.

Mt Herbert, at 919m is the highest peak on the Banks Peninsula and sits almost directly across the water from Lyttelton Harbour, near Diamond Harbour. It can be reached from sea level either from Diamond Harbour itself, or by cutting through Orton Bradley Park at Charteris Bay. I had read that the route from Diamond Harbour was rather uninteresting, so opted to head for Orton Bradley Park, a private farm park that is open to the public, and run by a charitable trust. I had taken part in a Zombie Run through here last year, and recalled seeing the signs for Mt Herbert whilst I was there. About a 40-minute drive away from the city of Christchurch it is reached by taking the winding Dyers Pass Road over the Port Hills and passing first through Governor’s Bay and round the head of the bay to Charteris Bay. A donation is requested from users of the park on entry. 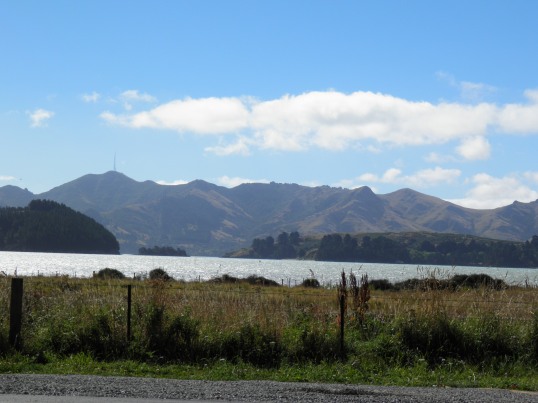 From the upper car park, the path winds through Orton Bradley Park, through woodland and skirting farmland. The strangest thing about this section of the hike, is the door in the middle of nowhere. Unattached to any wall or building, it stands solitary, straddling the walking path, painted purple on one side and red on the other. It is a rather random structure to come across whilst out hiking. On from here, the Mt Herbert track splits from some of the other walking tracks in the park and the sign indicates the summit is a 3hr 50minute walk away. Looking at several sites online, there is a bit of disparity as to the hiking time for this walk, but dependent on walking speed, a minimum time of 5 hours needs to be allowed for the return journey, especially if a bit of time is to be spent at the shelter and summit. 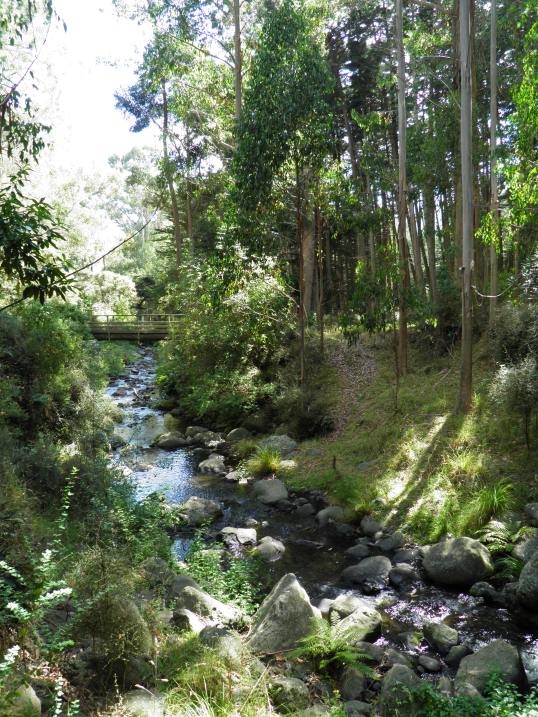 At the top of Orton Bradley Park, the track crosses over onto private farmland, and from here onwards, there are a lot of stinging nettles to wade through and cowpats littering the sometimes vague track. This is also where the height starts to be attained, and the track meanders uphill before winding round rock faces and the natural contour of the land. As it snakes back and forth across the hillside, there is a stunning view back towards the sea inlet at Charteris Bay. The water here is a beautiful turquoise blue and at its tidal margins it takes on a milky appearance. To the west, the rising bluff of Mt Bradley dominates the view. The final section to the ridge and the Mt Herbert shelter that sits astride there, zig-zagged so much I felt it would never end. When the shelter finally came into view, my pace quickened and I arrived to find it empty. On such a beautiful day, I’d barely passed a soul and was surprised to get there in the early afternoon and not find it containing some fellow trampers enjoying a picnic lunch. The view from the shelter looks north towards Lyttelton and the Port Hills beyond; and south towards the other peaks of the Banks Peninsula as well as Lake Ellesmere. Out the back of the shelter, a lonely drop-toilet, long since missing its door, provides one impressive view from the throne. 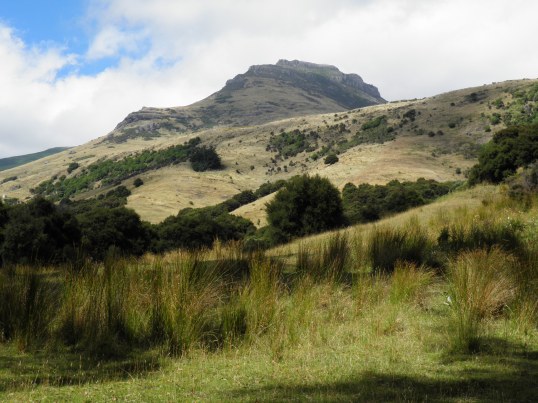 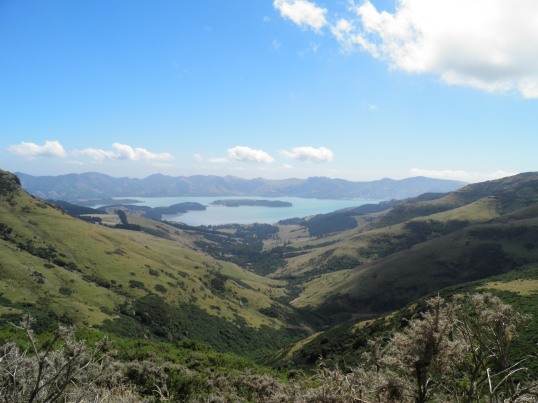 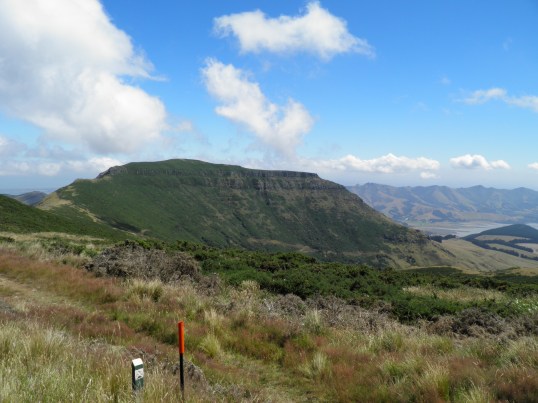 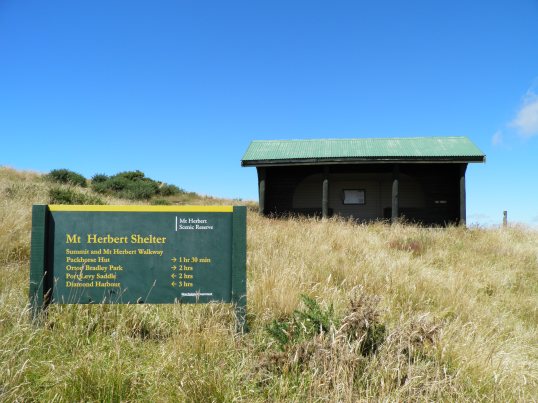 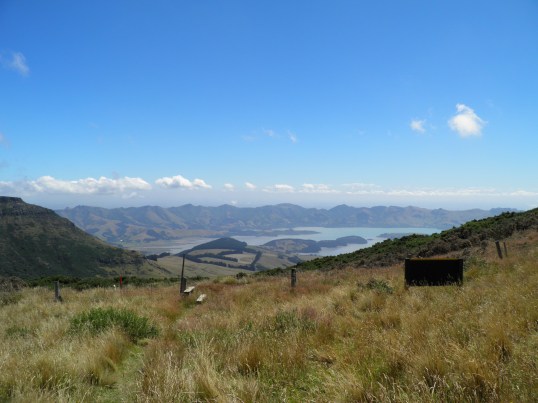 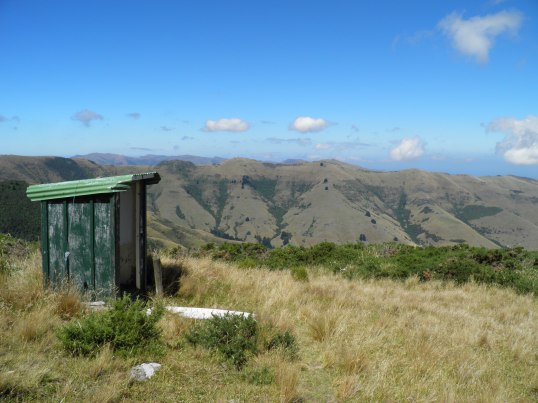 After a brief respite and no clue how long the walk to the summit would take (it is strangely missing from the directional board at the shelter), I set off on the final slog, only to find that it was a not-very-arduous 15 minute walk away. From the summit I could see multiple groups of people making their way up and down the Diamond Harbour route; it seemed much more popular. There was a 360 degree view over the landscape, with a large portion of Lyttelton Harbour visible and I could see that a sea fog had rolled in from the Pacific and was shrouding the city of Christchurch which was just visible over the Port Hills. From here, there is an ongoing track to Port Levy Saddle, another 1hr 40minute hike, according to the DOC sign, and had I left earlier in the day, I would have walked this extra section too. As it was, I didn’t have time, so I’ll keep it in mind for a return trip. At this time of year, most of the ridges rolling across the Banks Peninsula are brown in colour, having lost their greenness with the ongoing dryness of the summer months. 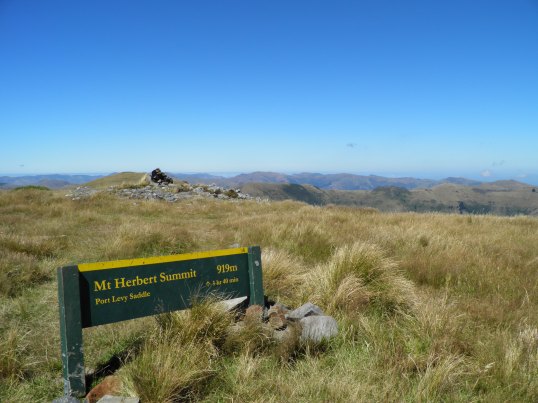 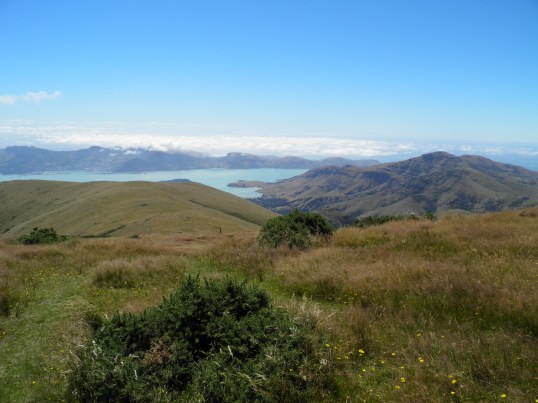 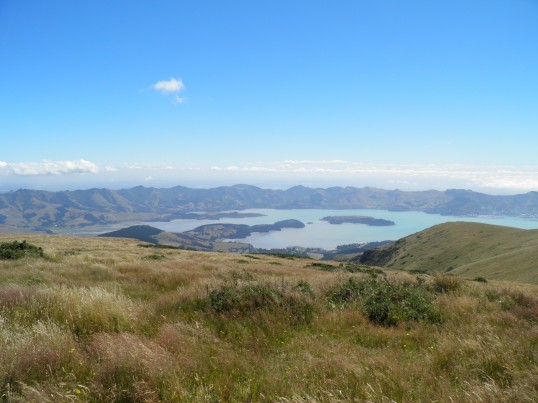 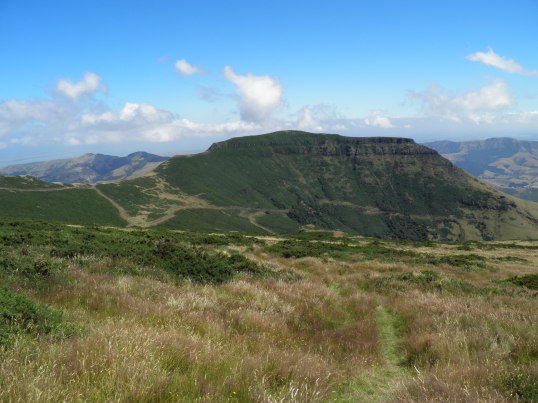 After returning to the shelter to enjoy some much needed lunch, I headed back down the route I had come up, meeting only 1 other person on the way, and stumbling across a dead cow which I had somehow managed to walk past without noticing on the way up. 5 hours after starting (2hrs 40 minutes up, 2 hrs down and a 20minute rest at the shelter), I got back to my car and found an information board detailing the walks around Orton Bradley Park. Mt Herbert is definitely worth the effort on a clear and sunny day. 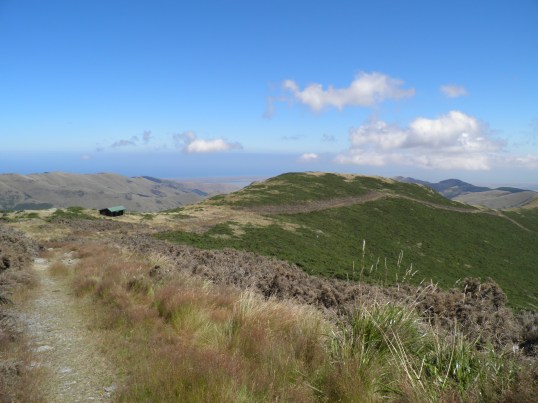 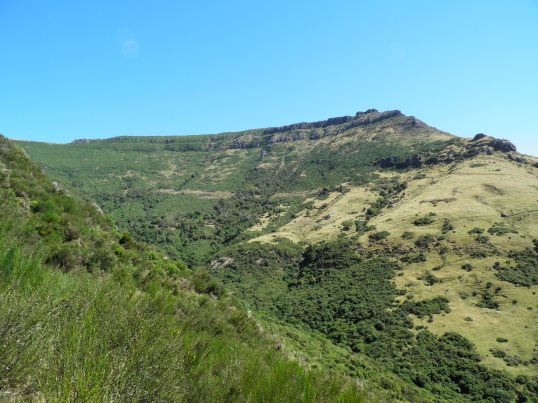