I can be a glutton for punishment sometimes. I am currently in training for two major hikes, one later this year and the other next year. When the weather has allowed, I’ve done my best to get out and about amongst Canterbury’s many mountains in an effort to put in some quality hiking hours. After getting a little disheartened towards the end of the previous week’s hike round Lake Clearwater, I felt reenergised to tackle something else the following weekend.

Around an hour of pleasant driving north-west of Christchurch lies Oxford forest, from which Mt Oxford pushes skyward. Down the gravel track of Mountain Rd lies one of two car parks from where several walks are reached. Mt Oxford summit track is a popular walking route, and the car park was full when I arrived. I’ve hiked some lesser known peaks where I’ve had the whole mountain to myself so to hear the voices of other hikers blowing in the wind was an unusual experience for me.

Starting at the Coopers Creek car park, the options are to follow the Ryde Falls track up stream to the waterfalls or to cross the west branch of Coopers Creek to summit Mt Oxford. The Department of Conservation (DOC) sign at the start gave a 3 hr estimation to summit, and I set off on the relatively flat route at a good pace. Early on I was overtaken by a man out with his dog who were running up the summit. 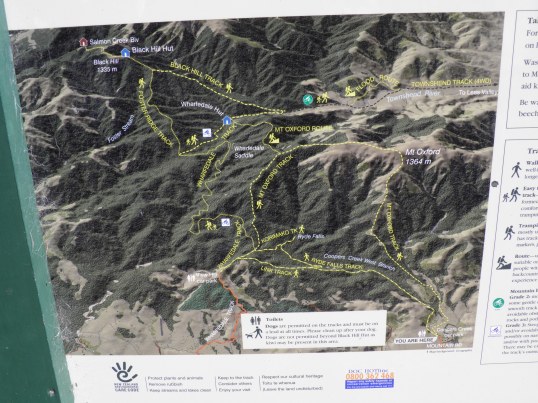 After a wander along a 4×4 track past bee country and a lodge near the creek, the path veers off into the forest, within which it remains for the first hour of the hike. The altitude gain is there but as constant as it is it’s not too taxing and through brief breaks through the tree line you can appreciate that you are rising above the Canterbury Plains. There was plenty of bird song filling the air and I was regularly accompanied by little fantails flitting through the trees. I was feeling good and felt like the summit must be getting close. I stepped out of the treeline and into the beautiful sunshine around me, to discover that there was still a long way to go. 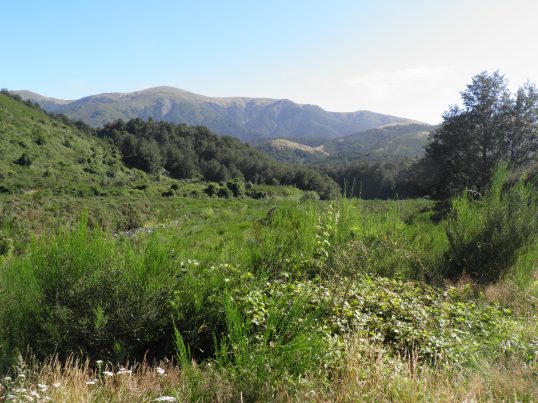 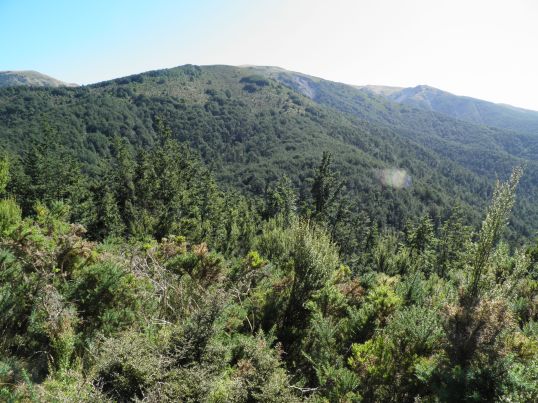 After that initial hour, the rest of the hike is exposed to the elements, and aside from a few small plateaus, the altitude gain continued for nearly another 2 hours. I passed lots of people coming down, giving the occasional sound disturbance to the birds and the crickets. That aside, it was a very peaceful hike with next to no wind. The higher I got, the further the Canterbury Plains disappeared behind me, and eventually, and by this point gratefully, I found myself at the summit (1364m/4475ft), and was secretly pleased to have it to myself. To one side the Plains spread out towards the horizon, Banks Peninsula just about visible through the haze. On the other side of the mountain, mountains rolled away into the distance, and I settled down on a makeshift bench on the summit to enjoy some well deserved lunch with that awesome view. 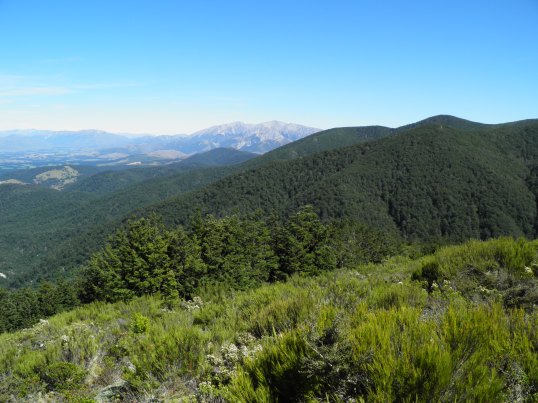 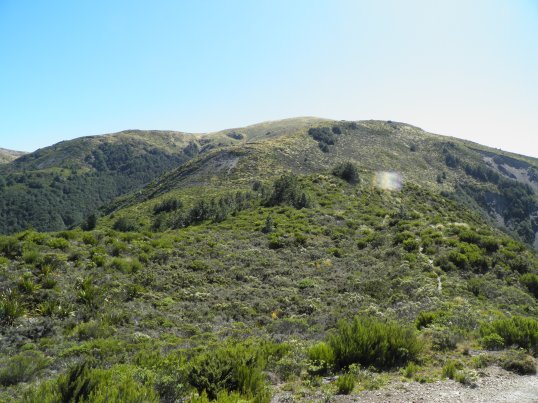 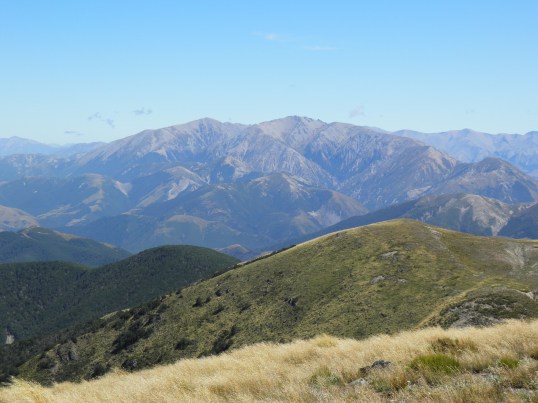 From the summit, the quickest option would be to return to the car park by the same route. There is also the option to hike to Wharfedale Hut deeper in the mountains, or to take the loop track back to Coopers Creek along the summit. Having soaked up the view for over half an hour, and feeling refreshed, I set off across the summit with the neighbouring mountain range in full view. The summit marker gave a 45min time estimate to the junction for the Hut, and I headed off at a reasonable pace. For the second week in a row, I was surprised to discover that the marker had underestimated the time for this section which is highly unusual for the DOC signs. Following the ridge line but descending slightly, the vegetation was quite sparse until eventually the tree line was reached again. I passed some hikers who were tired and sweaty, and finally, an hour after leaving the summit, I hit the first junction. 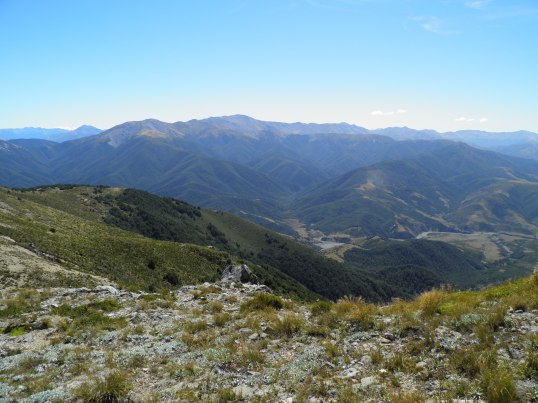 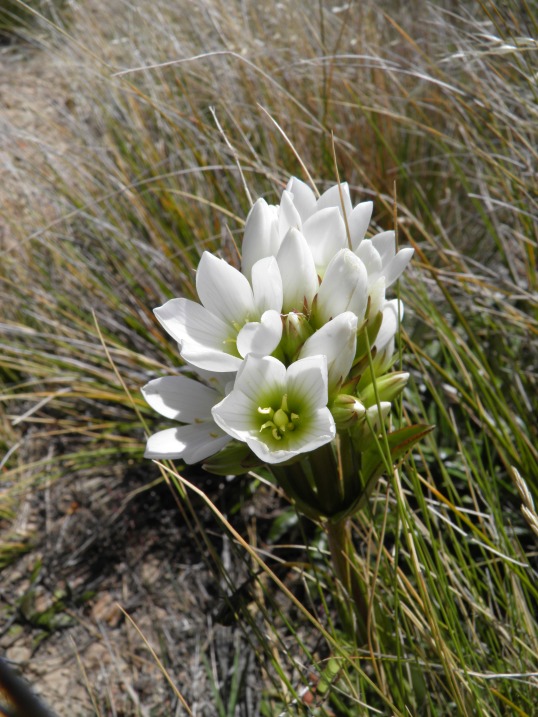 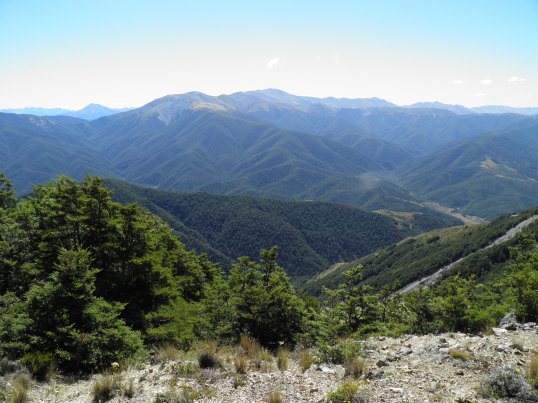 Persisting on the Mt Oxford track, the next junction was listed as an hour away. There was little to see but for the forest which enveloped the path, and it was an hour of ups and downs which felt like forever until eventually the path broke out at another track. Looking left there was a marker a few steps away, and I was gutted to discover the car park was still another 2.5hrs away according to the sign. It was difficult to gauge my location within the forest because there was no view, but I knew I was still quite high up. I can get quite bored with forest walks sometimes as it quickly descends into one tree after another, and by now 5.5hrs after leaving my car, I was a little bit fed up with walking. But there wasn’t exactly any other choice but to push on. 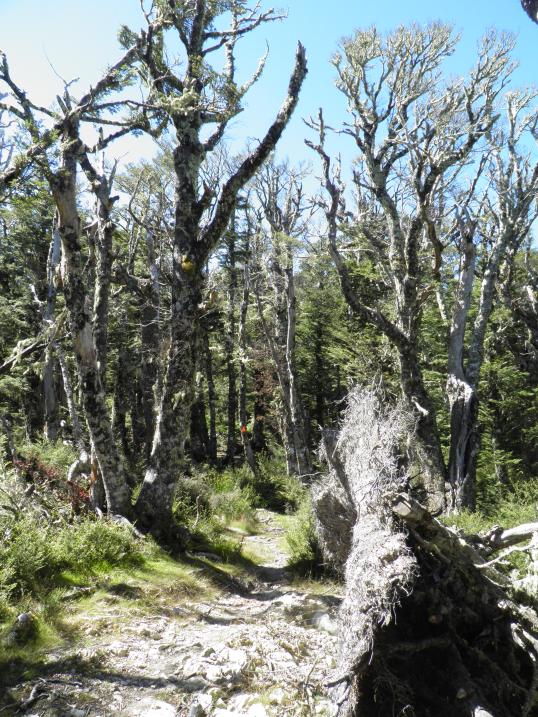 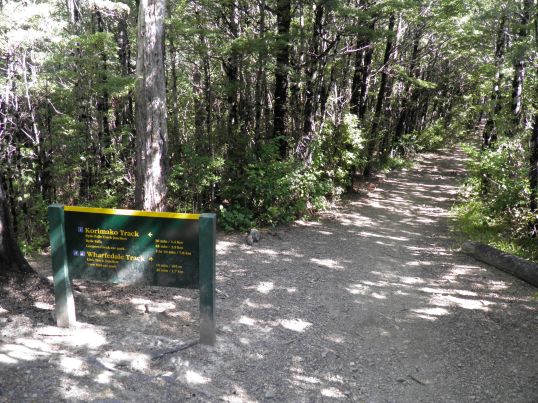 Taking the Korimako trail to Ryde Falls junction, I had previously made the decision to take the detour to visit the waterfalls, even although I was tired. At the Ryde Falls junction, it is signposted as a 15min walk to the waterfalls, but I power walked the distance, dropping down the bank, crossing the stream and pushing up the other side. There are 5 tiers to the waterfall, but I could only really see 3. The falls were in shadow with the sun starting to drop, and I looked at them for long enough to make me feel like the side trip had been worth it, before retracing my steps. With more time, there is a campsite here and the option of climbing up or down the side of the falls to get a differing view. As the waterfalls can be reached from 2 separate car parks, it is possible to hike there without having to tackle Mt Oxford first. 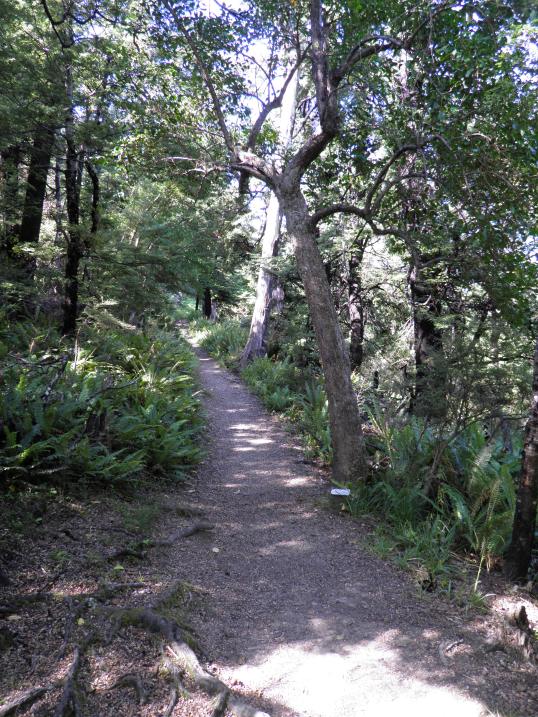 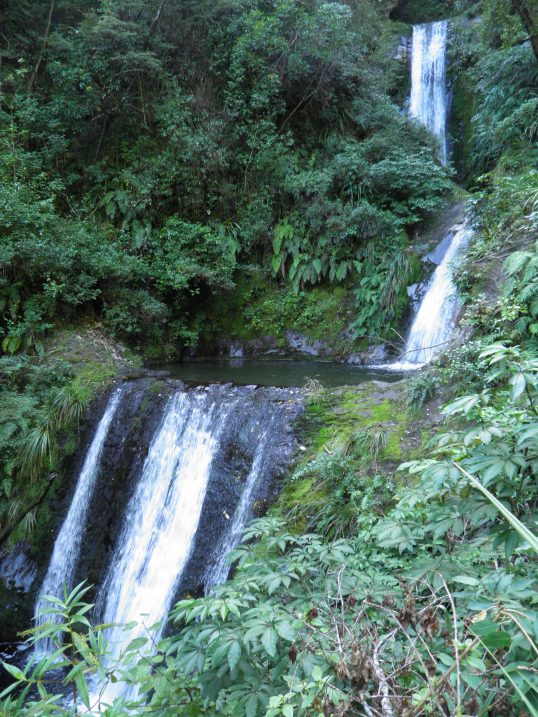 Like the hike round Lake Clearwater the week prior, that final portion of the hike was quite draining. With nothing but trees for well over an hour, I could only focus on getting back to my car and taking off my boots. I was so pleased when the path finally broke out of the trees again and I could finally appreciate just how far I’d walked. Still up a hillside, the sun continued to illuminate the countryside and the final stretch was a pleasant evening walk round a headland and along the river bank. Finally reaching the Cooper’s Creek car park, mine was the only car left, and I happily kicked off my boots, ate the rest of my food and set off on the hour long drive home.

It is unusual for DOC signs to give too short a time frame for a hike, but regardless of the route chosen and despite its popularity, these are some full-on hikes not to be taken lightly. The full loop took me nearly 8hrs including about half an hour at the summit and the half hour detour to Ryde’s Falls. It is possible to summit Mt Oxford and take the same route back in about 5hrs, but for the full loop track, you’d better love forests!