It was a grey afternoon as I left Tongariro National Park behind to head north. On State Highway (SH) 47, I was covering fresh ground, but it wasn’t a long drive to reach first the large expanse of Lake Rotoaira, and then the car park for the hidden Lake Rotopounamu. Nestled on the slopes of Pihanga (a volcano that, according to Maori legend, was a maiden that was fought over by the warrior mountains, of whom Mt Tongariro was triumphant, getting to stand by her for the rest of eternity), the lake feels secretive and secluded. There were plenty of parked cars, but it appeared that most people were heading back as I was heading in, so it felt nice and quiet. A circuit trail heads round the circumference of the lake, taking about an hour. Despite the occasional drizzle, and the overcast sky darkening the waters, it was a pleasant stroll with an ever-changing perspective.

My bed for the night and my first chance of a shower in 4 days, was in Taupo, a town I’ve stayed in several times. I’ve always approached it via SH1 up the east coast of Lake Taupo, but I decided to keep west on this occasion to see a part of the countryside that was new. Taking SH 41, there were a couple of lookouts over the lake towards Tauhara, another volcano, in the far distance. But after just a short while, the road left the lake side behind and I discovered that this route didn’t really offer a lakeside view unless you took a side road. Turning north on SH32, I eventually reached a back road to Taupo that would allow me to visit Kinloch on the north shore of the large Lake Taupo. I was intrigued by the Scottish name, and arriving in the evening, it was peaceful and quiet. 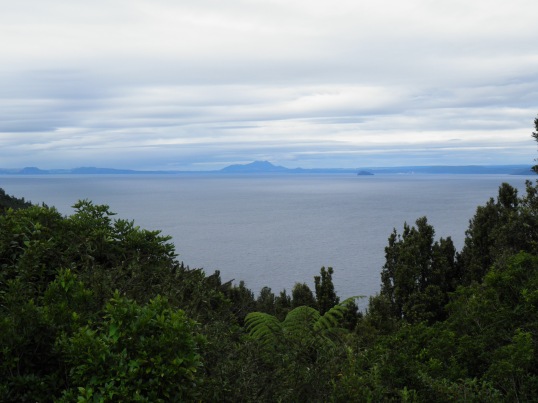 With some chips from the local fish and chip shop, I quickly garnered some feathered friends as I sat by the beach to eat them. A heron waded in the shallows as a family played near the water’s edge. Behind me, a pretty little marina was packed with boats and a plethora of ducks slept, bobbing on the water in between them all. Despite being so close to Taupo which is a popular tourist spot, this place felt so peaceful and empty, and I could see the appeal of having a bach (a Kiwi holiday home) here. Taupo itself doesn’t really float my boat much. It’s always just a place to break up a journey, and that was pretty much its purpose this time round too. I checked into my hostel, had a lovely warm shower to clean off the 4 days of hiking, and headed off to a local restaurant for dinner. 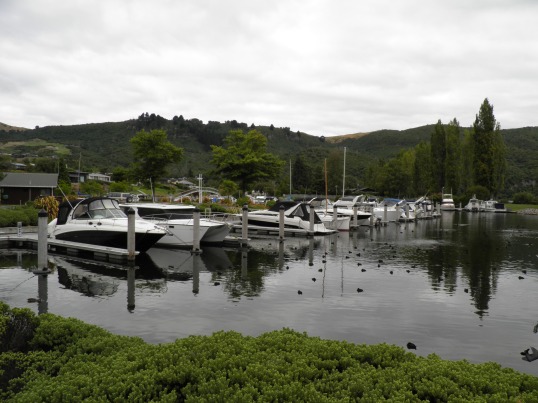 After a delicious breakfast in a nearby cafe, I was quick to leave Taupo behind. I pulled in at Huka Falls and was appalled at the crowds here. Perhaps I’d just picked a bad time, as there were several coachloads of people milling around, but this was the busiest I’d seen the place, and it was very off-putting. I remember many years ago one of my colleagues at my old job in Scotland coming back from a holiday in New Zealand and proclaiming it a beautiful country but she wouldn’t want to live there on account of all the tourists. I thought it an odd comment at the time, but now having lived here for 5.5years, I really do see what she means. Whilst there are still plenty of untouched spots in the country, and areas that are more frequented by locals than travellers, the main places in the country can be rather unpleasant during the high season from November through to March. I stayed only long enough to take some photos and was quick to get on my way again.

Whenever I am in the geothermal zone between Rotorua and Taupo, I try and visit a different thermal park. First time around I visited Waimangu Volcanic Valley (which to this day remains my favourite) and Wai-O-Tapu (one of the region’s most famous). On a later trip I visited the Craters of the Moon, and on this trip, I was keen to visit one that had been on my radar for a while: Orakei Korako. At the end of a road in the middle of nowhere, the visitor centre is on the western bank of a narrow arm of Lake Ohakuri, whereas the thermal area is across the water on the east bank. Only accessible by boat from the visitor centre, it makes for a slightly more unique experience. The water had a glass-like quality to it as the little boat carried us across, and at the far side we were all greeted by columns of steam rising from the ground around us. 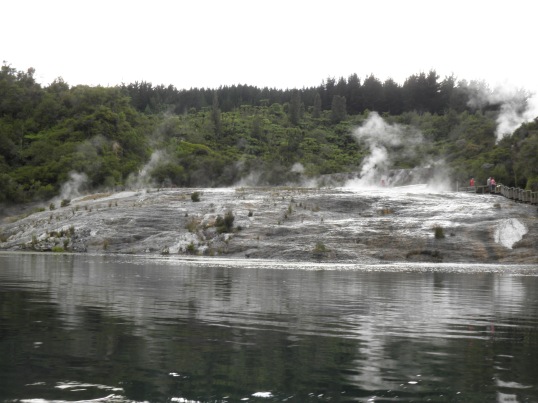 Previous volcanic eruptions have destroyed some of the regions most historically beautiful geothermal areas, in particular the famous pink and white terraces. From the dock, the boardwalk (which has a recommended directional route to follow) leads up past a large steaming rock that appears to roll down the hillside to the lake, even extending out of sight below the water. There is plenty to look at in the park as the route winds its way up and around a collection of steaming vents, bubbling mud and hot pools, and large patches of silica deposits that are variably stained with the colourful microbes that live in such hot and often acidic or alkalinic environments. 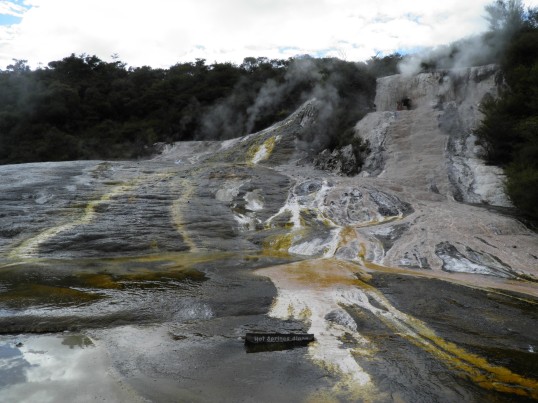 Living in the South Island where the island is dominated by mountains and lakes, and the driving natural force is earthquakes, it is easy to forget about this world of volcanism that exists in the North Island. A few months following this trip, through research for some coursework, I have gained a bit more knowledge on the geology of this fascinating zone, and whilst it can still be enjoyed without any knowledge about how this part of the world is formed, it is definitely appreciated more with even the lightest of research in advance. But like the other geothermal zones, Orakei Korako is a delight for the senses: from the sulphuric smell for the nose, and the hissing and popping sounds for the ears, to the colourful contrasts for the eyes. The only thing that cannot be experiened is touch, with many of the rocks and water spills dangerously hot or erosive. 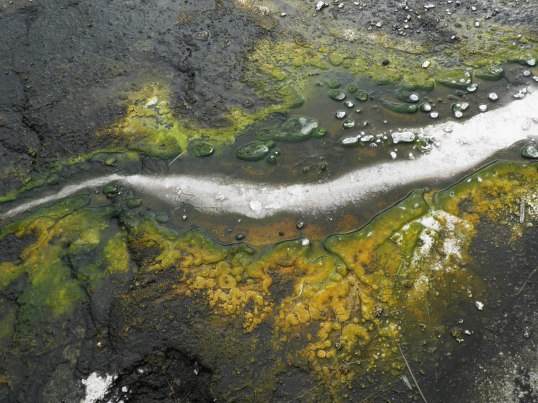 After completing the almost figure of eight circuit of the park, I took the boat back to the visitor’s centre and pushed on. I had a long drive east to Napier on the Hawke’s Bay coastline, and I had no idea what was in store for me. It took a while to reach SH5 which took me south to skirt past Taupo before cutting east to the coast. It started off innocently enough, cutting across a vast plain and then through forests, before suddenly it cuts a winding pass through the Ahimanawa Range. For the most part following the gorge cut by the Waipunga River, I was blown away by this part of the drive, and it really challenged my car when the only overtaking zones coincided with an incline. I regularly spotted areas that would have been amazing to go hiking through, but unfortunately there wasn’t really anywhere to stop and take photographs, so I emerged on the other side with nothing visual to show for it. I did however find myself in sunshine, and coming across a multitude of signs for wineries. The great expanse of Hawke’s Bay greeted me as I turned onto SH2 to reach Napier, a city who’s charms were quick to wash over me. 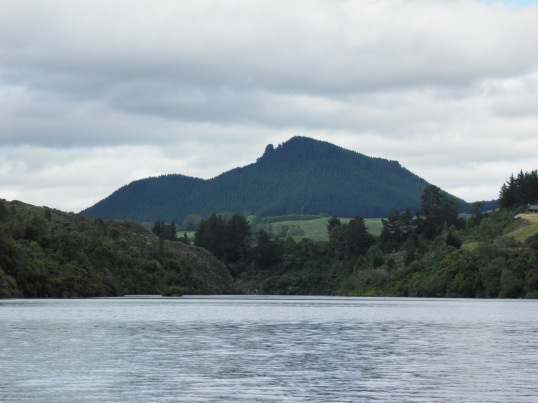 Following the earthquake of 1931, New Zealand’s deadliest natural disaster, much of the city of Napier was razed to the ground. A widespread rebuild in this era has resulted in a predominantly Art Deco theme to parts of the city which now acts as a major draw card for tourists. Split across either side of a natural hillside and divided in two by the harbour, the main waterfront spans the long promenade of the expansive Hawke’s Bay, and it is behind here that the bulk of the Art Deco building’s lie.

I was delighted to discover that my hostel was across the road from an ice cream parlour and some creamy delight from here was the perfect accompaniment to walking along the foreshore. Starting at the Tourist Information centre with its unusual sculpture outside, I picked up a walking and cycling map of the city and headed back out where I was immediately greeted by a shiny open top car. In the sunshine it was a colourful place with sculptures on the street corners and the buildings of the high street were painted in a variety of pastel shades. From the lampposts to the street names and the facades, the theme was pretty solid throughout, and in some of the tourist stores, the staff were dressed up like cast members of the Great Gatsby movie. 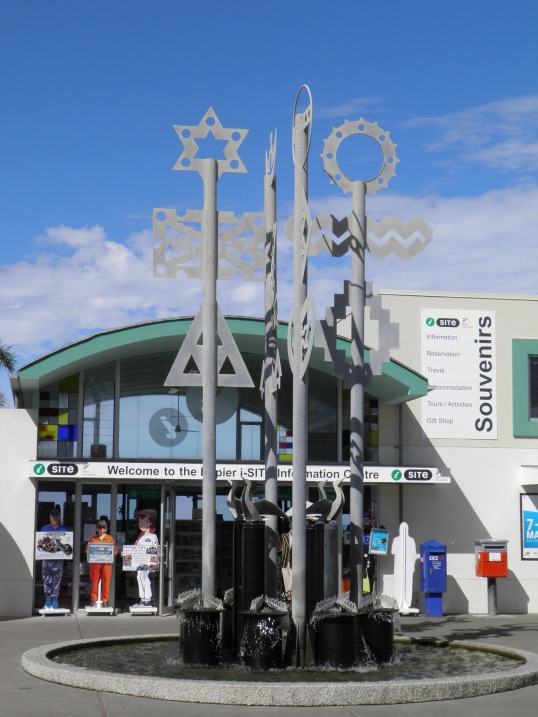 By sheer coincidence, it turned out to be the opening night at the theatre for the stage show of Mary Poppins and I managed to score a ticket for later that night. Returning to the promenade, there was ongoing work here to upgrade the facilities, but there was a fountain and gardens to look at as well as a skate park and an old-fashioned open-air auditorium. I snaked through the various points of interest to return to my car before cutting round Bluff Hill past the harbour to the Ahuriri suburb where a collection of bars and restaurants line the marina front. It was Friday evening and they were all packed. I grabbed a pizza from a local takeaway and enjoyed it by the park before taking a wander around here. Eventually though, it was time to head to the theatre for what turned out to be a really enjoyable production. Exiting to darkness, the fountain at the park was lit up in ever changing colours, illuminating the night sky and there was an infectiously positive mood in the air as people moved between the bars. I was buzzing and on a high when I returned to my room to discover that I had it to myself. But just as I was getting ready to turn in for the night, late as it was my luck changed, and so began the most uncomfortable and unnerving stay at a hostel that I have ever had. 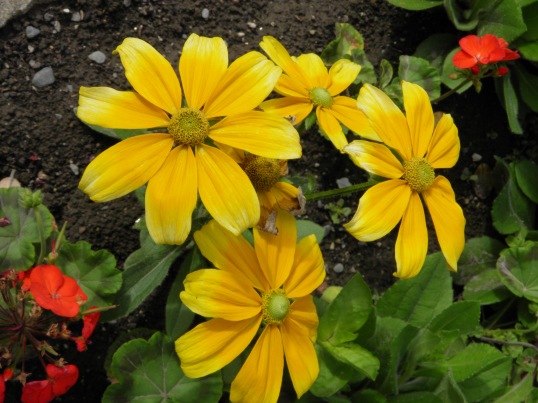