Spring Roadie – From the Lakes to the Coast

With so much choice, it’s hard to pick the best drive in New Zealand. I love so many of the South Island’s roads and mountain passes, we’re really spoilt for choice here. From Wanaka, the road to the west coast via Haast Pass is one of these great drives with so many places to stop at on route. I’d previously driven as far west as the Blue Pools, but beyond that was a small part of the country that I’d never been to before. At the time, nearly 6 years since arriving in the country, I’d already crossed off a large percentage of it, and this was another little section to finally cross off the list.

A short drive from Wanaka, the views start almost immediately with the arrival at the neighbouring Lake Hawea with its small and quiet little settlement of the same name. There was a haze in the air, meaning the view wasn’t as sharp as I’ve previously seen but the lake was still a brilliant blue and by the lake side the water was crystal clear. Flanked by mountains, it is a beautiful vista, and my brother and I took a short walk along the lake side before stopping at the dam at the entrance to the village. It was so peaceful, with few people here compared to Wanaka and with little development here either. Only a handful of people were milling around, so our view of the blue lake under the blue sky was one of tranquility. 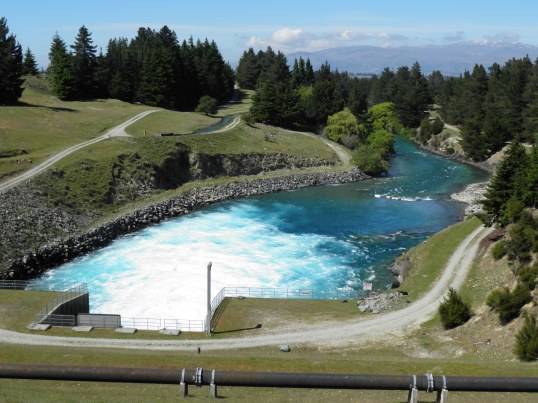 Continuing along the highway that flanks the lake side, there are a few places to pull in to appreciate the view. The main one is about two thirds of the way along, but it can get quite busy, especially when a coach turns up. From several of these, it is possible to appreciate the length of the lake. These are the trips where I wish I lived nearer as I know there are so many hikes that could be done in the area. Passing a couple on the way, we stopped at the first of two lookouts at the Neck, the narrow isthmus that splits Lake Hawea from Lake Wanaka.

Crossing to the other side, we said goodbye to Lake Hawea and welcomed the equally beautiful sight of Lake Wanaka again which the road follows for some distance. Again there are some great view points along this road, and we stopped first at a boat ramp and then at the Boundary Creek campsite which was very busy. At this point, we were oblivious to the time pressures of this drive. We hadn’t hurried ourselves to leave, and with the beautiful sunny sky above us, I was stopping left right and centre so we could take lots of photographs. Although my brother had planned the route, he’d given me plenty of leeway with where to stop each day, and determined as I was to show off the country I now call home, I was taking every opportunity to do so. This meant a very leisurely morning and a slightly rushed afternoon as the enormity of the distance to cover became more apparent. 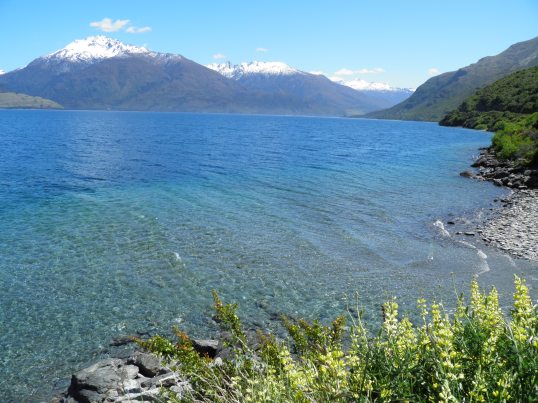 Eventually though, we left Lake Wanaka behind us and started across the valley that would wind us towards Haast Pass. We were able to get a bit of distance behind us, pushing on to Blue Pools before stopping. This place is very popular, not just with tourists but with sand flies, the bane of South Island waterways. I grew up with midges in Scotland, and they never bothered me half as much as the sand flies do here in New Zealand. No matter what repellent I use, their swarms have ruined many an outdoor experience for me, and here was to be no different. They gave my brother with his foreign smell a wide birth, and pestered me like crazy once we emerged from the short bush walk to the river. Like the last time I was here, I thought I’d risk taking a paddle in the glacier water, and like last time it was so frigid it hurt my feet, and I wondered about the foolhardiness (or bravery) of the people who jump from the bridge or go for a swim. 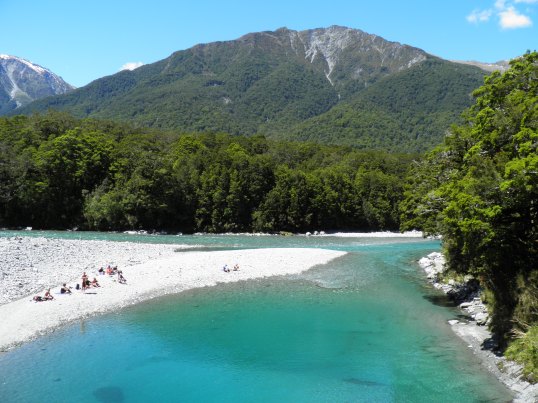 From here to the west was all new territory for me and I was excited. Emerging from the trees, we reached Cameron Flat where we stopped first at the campsite and then a short distance further where we trudged up to a lookout over the river. We ate lunch here overlooking the valley below, about half-way between Wanaka and the west coast. Our destination for the night was still some distance away, and from this point onwards I unintentionally took over my brother’s road trip and kept stopping, even after my brother voiced his want to skip some places. 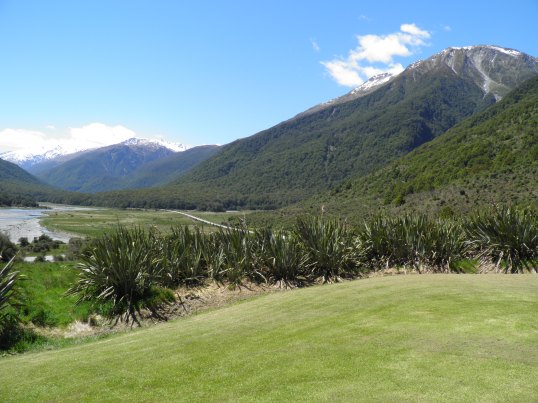 One of these stops was Haast Pass where a walk trudges up the hillside to a lookout. It was a sticky walk in the heat, steeper than I’d anticipated, longer than I’d thought it would be and the view a little less spectacular than I’d expected (although still pretty enough). In hindsight, we could have skipped this, as with Fantail Falls which we also stopped at further along the road. A short bush walk brought us out to a pebbly river bank which was littered in stone stacks. The waterfall was on the far bank of the river and as before, the sand flies descended on me.

Beyond the Gates of Haast, a road bridge that spans the Haast River, and down the hill was the prettier Thunder Creek waterfall. Feeling guilty now about taking over my brother’s trip, I quickly offered to back-track to the bridge when my brother voiced an interest in seeing it up close. So back up the hill we parked either side of it then walked down to watch the water gush through the chasm. It was exceptionally noisy but we were the only ones there and deep as it was within a canyon in the mountains, we could look up at the peaks that flanked us undisturbed.

Eventually the road cut once more across the Haast river, and here at Pleasant Flat campsite, there was a stunning view across a plain to a snow and cloud capped mountain peak. Following the river downstream, State Highway 6 eventually takes a near 90 degree turn where the Haast river and Landsborough river unite. As we headed west, the clouds built up more and more on the mountain tops around us and the sunshine disappeared from view. We stopped at the Roaring Billy waterfall, another stop which with hindsight we could have skipped, and wandered along the river bank a little before the final push to the west coast. 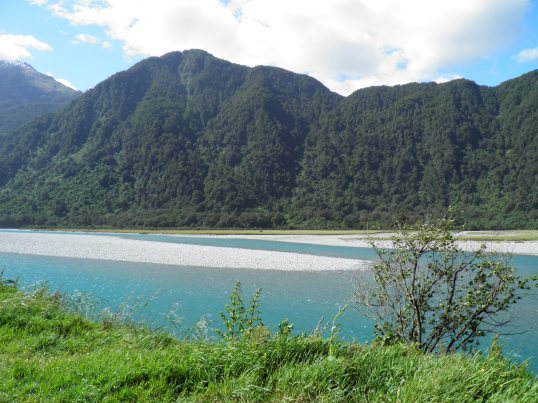 Finally we cut through Haast and found ourselves back in sunshine as we reached the western flank of the Southern Alps. I had pre-warned my brother about the pebbly nature of west coast beaches, so found myself eating my words as we got out the car at Haast beach and walked out onto a beautiful stretch of sand. Behind us the clouds shrouded the mountain tops but in front of us the Tasman Sea glistened under the golden orb. The west coast is notorious for its wild weather so it was nice to arrive there in sunshine. Unfortunately we were still about 120km away from our night’s stay and the afternoon was wearing on towards evening. The drive was proving why New Zealand’s distances don’t look much on paper, but can easily take a lot more time than anticipated. 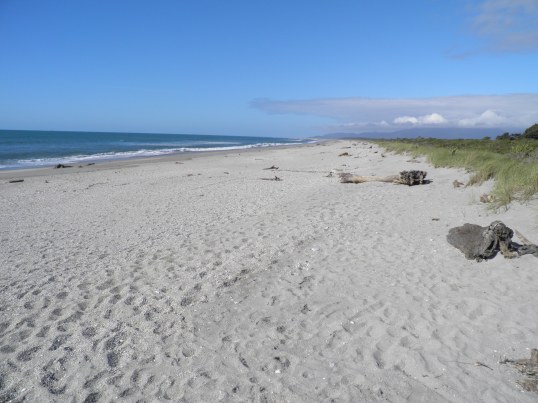 We pulled in at Ship Creek which I would have loved to have just relaxed at for a while. There were several people overnighting here and I was a little jealous. We explored the immediate vicinity before getting back on the road. At Knight’s Point the sun was getting low causing a glare to the west, but it still seemed sunny ahead of us. But the road cut inland and as it did so, it plunged us back under the cloud that had been shrouding the Southern Alps.

My brother had been keen to do a walk to Monro Beach where it is possible to go penguin watching. But due to me taking over his trip and stopping at so many places on the Haast Pass road, my brother didn’t feel we had the time to do the hike and I felt guilty when he requested we keep going when we passed the start of it at Lake Moeraki. If I was to do the drive again, I’d skip the Haast Pass lookout and Roaring Billy falls if not the Fantail falls also, which probably would have given us a bit of time to do the Monro beach walk. From here onwards though, we drove through light rain, the weather that I’m more accustomed to on this coast. I was so over driving by this point too, so although we stopped briefly at Lake Puringa, the rain hadn’t dulled the sand flies, and I wasn’t keen to hang around long. In the ever darkening skies, we pushed through the remaining 70km to finally pull in at our stop for the night in Fox Glacier, at the southern end of the Glacier Country. I could but hope for the rain to have cleared by the next day, ready for us to explore another unique part of New Zealand.

7 thoughts on “Spring Roadie – From the Lakes to the Coast”