New Zealand’s network of back country huts are the welcome sight at the end of many a hike, although they vary in size, style, and comfort level. What they all have in common is a lack of electricity, meaning that when the sun goes down at night, everybody tends to go straight to sleep, and in the morning as the hut lights up with the morning sunlight, the first stirrings of the early risers awaken the rest of the occupants from their slumber. And so it was as I lay asleep under the kitchen bench top in the over crowded Woolshed Creek Hut at the back of Mount Somers. I don’t know if it was the light or the early risers that stirred me from my slumber, but soon the whole hut was bustling with activity. The vast majority of the hut occupants had hiked in on the shorter Miners track from the car park off Ashburton Gorge Road, which makes it a suitable walk for families. I however, was parked at the Sharplin Falls car park on the directly opposite flank of Mount Somers and had a full day’s hike ahead of me to get there.

Being in February, I had picked an exceptionally hot weekend to do the hike, having hiked in on the Mount Somers track in 27oC. For my return leg, the temperature would peak at 29oC and the majority of the return leg was exposed to the elements. I’d gotten a little deflated at the end of the previous day, having taken 7hrs to hike what should have been a 6hr trek. With the return route listed as an 8hr trek, I set off that morning already feeling a little deflated again. First things first, there was no point even putting my boots on upon leaving the hut as I had to wade across the stream back to the far side to rejoin the Mount Somers track.

Starting off with a wander along the valley floor, the track skirted up a low ridge to face a deep gulley across which, a long swing bridge spanned the gap. The plaque denoted that it had replaced a ladder and I wondered if that meant that previously the river had had to be forded. This seemed like it would have been a rather dodgy affair if it had. I was glad of the bridge to take me safely across, and from then onwards, the climb began. First up and over an exposed ridge from where I could still see the hut in the valley behind me, and then into a little forested section. After wading across a stream in my leaky hiking boots, I climbed back out to come across a side track leading to a waterfall. Deep in shadow, it was difficult to get a decent photo of it, but it was definitely worth the short side trip to go and view it. 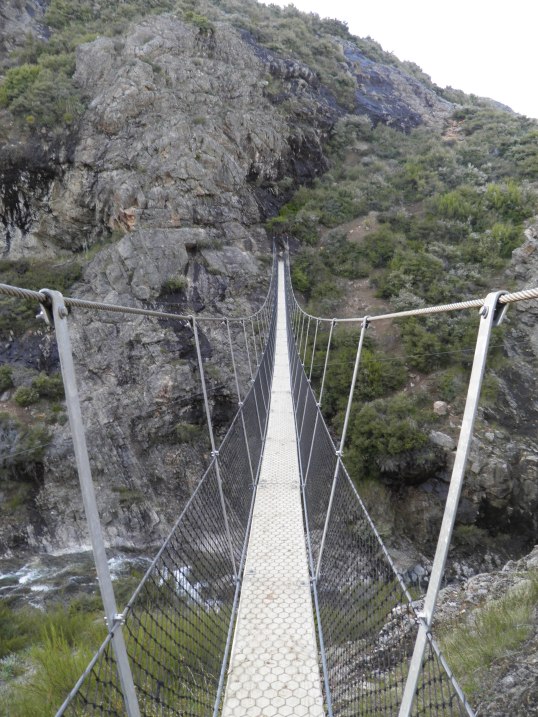 Once back out the forest, the next section of track was probably my favourite, despite the constant climb that went with it. It was exposed but this meant the views were incredible, and as it climbed and hugged the edge of a steep gully, I could see mountains rolling off into the distance, including some distant peaks that still had snow on them. There was only a couple of other people on the track ahead of me, otherwise it was a quiet trail, and from my vantage point I could see some of the other hut occupants walking out on the lower trail they’d come in on. As the track reached its highest point for the day, it cut directly under a rocky overhang where a cut out in the rocks was known as the Bus Stop overhang. Someone had even attached a Bus Stop sign to the edge of the rocks which I passed after taking a rest to enjoy the view. 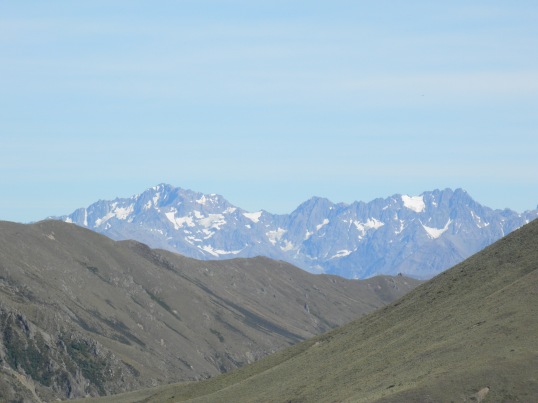 It wasn’t far before the track descended steeply, and suddenly the vegetation changed dramatically from the scrubby bush to reams of tussock before the stumpy trees reappeared briefly whilst the track cut down to another stream and cut back up the other side. It was then an almost flat trek across more tussock, from where there was a final view of Woolshed Creek Hut in the far distance before it disappeared out of sight. Still on the western slope of Mount Somers, I eventually came across the track junction with the Rhyolite Track which cuts steeply down to the same car park that the other hut occupants would reach on the Miner Track. For me though, it was time to cut round to the south face of the mountain and push onwards.

I've been reminiscing about being in the mountains as tomorrow is the anniversary of a very special hike. This trail in New Zealand is on the Mount Somers track, a 2 day hike round the base of the mountain. Don't be fooled though, it's neither flat nor a walk in the park but boy are there some good views from it. #hiking #hikingheartbeat #hikingadventures #nztramper #makeithomenz #mountains #mountainshotz #mountsomers #canterbury #canterburynz #pocketsofawesome #southisland #southislandnz #newzealand #newzealandwithme #ig_newzealand #nzmustdo #lovelynewzealand

There was next to no shade on this south face, and having overtaken the couple of hikers back in the tussocks, it was just me and them some way behind me on this track. For the rest of the day, the trend was set, with a constant undulation up and down in altitude the whole way back to the car. The view south was also less interesting than the view west or the view north the day before, and under the beating sun, it didn’t take long for me to start to get frustrated again. I’ve done many hikes, including 8hr day hikes, but this was my longest hike with a full pack on my back. I’ve also let my fitness reduce and my weight increase, so it was as much frustration at my self for letting myself lose condition as it was about the monotony of the hike in the blazing heat. But there were some interesting sections as the track followed the contours of the mountainside, passing or crossing multiple streams as it went, and the vegetation was by now back to the bushy scrub or the occasional copse of trees. 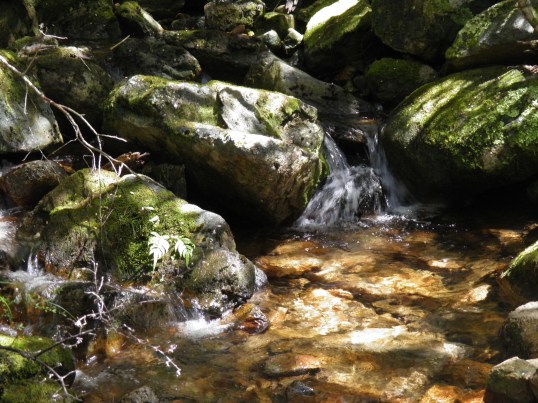 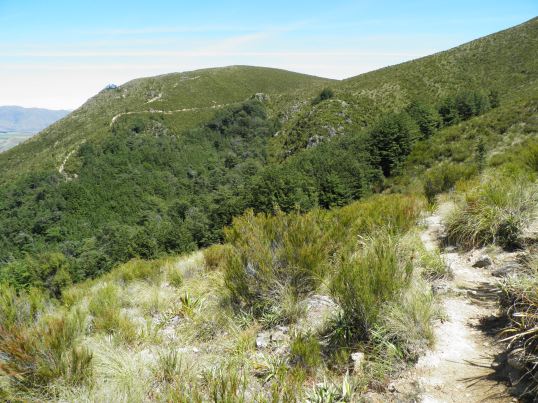 I had my eye on a little shelter where I planned on having lunch, but as with the day before, it felt like it wasn’t getting any nearer, and eventually I decided to stop to eat in the shade of a small copse near a stream. When I finally reached the little shelter I did a quick nosey inside before continuing, realising to my dismay that there was a rather steep incline ahead. Thankfully it turned out that most of it was in the shade of a woodland, and despite the perceived exhaustion, it was actually not too bad to negotiate in the end. After reaching the top of the incline, it skirted yet another corner to suddenly open out of the trees onto the top of a large scree field. Picking my way across it carefully to avoid creating a stone avalanche, there was just another small incline until finally I found myself at the junction with the Mount Somers summit track. 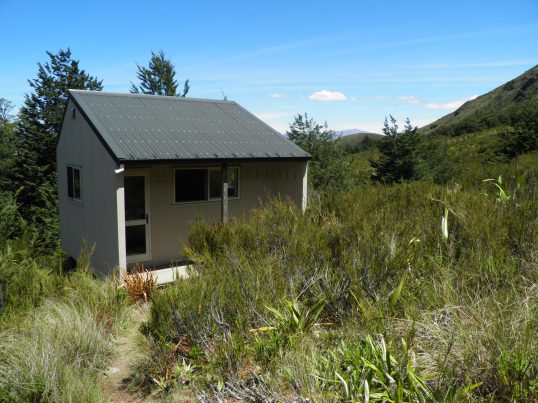 Sometimes this can be the most comforting thing out on a hike: the orange arrow that reassures you you're going the right way. I've done so much hiking this last couple of weeks, these arrows have been a very familiar sight. #arrow #orange #waymarker #doc #departmentofconservation #docgovtnz #hiking #hikingheartbeat #hikingadventures #nztramper #makeithomenz #forest #forestwalk #trees #southisland #southislandnz #newzealand #newzealandwithme #ig_newzealand #nzmustdo #lovelynewzealand

It was all downhill from here, and I told myself gleefully that I was nearly finished, but as the sign at the junction attests and as I consulted my map to remind myself of the next section of the track, there was still 1/3rd of the south face track to walk! There were a few more people on this part of the track with those coming off the summit heading home too. I just focused on the thought of my car and picked my way down the lowering ridgeline before I finally entered the forest for the final section. I passed some older gentlemen that had come off the summit and they started congratulating me when they found out I’d walked the circuit. I’m never sure if it’s a genial hiker’s praise or a surprise at the fact that I’m a solo female hiker, because I’ve been stopped a few times by fellow hikers (always males) who seem surprised or overly congratulatory about my intentions or achievements. Certainly, I come across far more male hikers (solo or otherwise) than I do fellow female hikers (solo or otherwise), so probably I’m still in the minority. 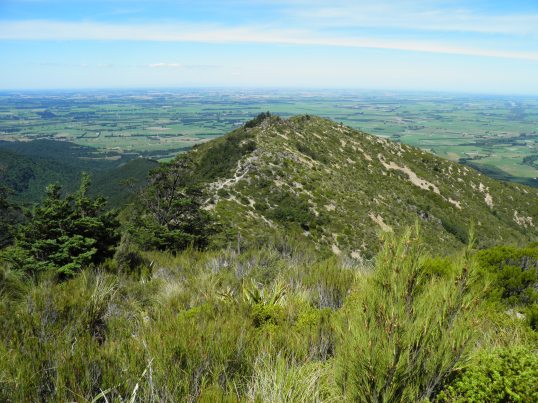 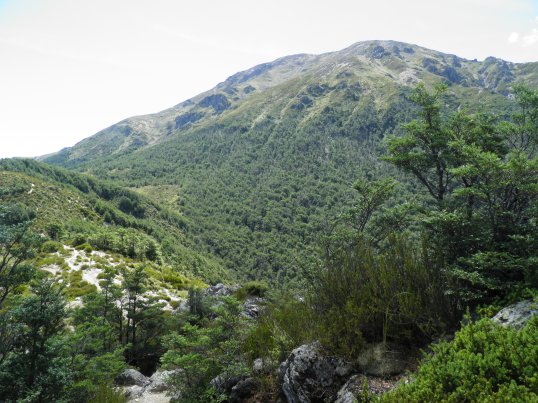 When I reached my car, 8hrs 40mins after leaving Woolshed Creek Hut behind, it wasn’t long before the same men completed their hike and we shared in each other’s elation. In the intense heat and exposure, I had run out of water about an hour before finishing, as I had done the day before. This hike was the first time that had ever happened and I reflected on the fact that I had underestimated the hike. In the end though, I felt more proud of myself for completing it, having ticked another Canterbury hike off the list, and feeling far more prepared for the 3 day hike I had to come in a few weeks time.