For as long as I can remember, I’ve had a desire to go to Antarctica. This desire has only grown stronger over the years, especially as it now remains the only continent I have not been to, and I’m particularly interested in the geological, climatological and biological studies that take place there. With the cost of travel there being prohibitive, the continent forever feels just out of reach and yet I am regularly taunted and teased with its closeness due to New Zealand having strong ties with the place. So when I found myself standing near Stirling Point, back on the mainland of the South Island, after a fantastic week in Rakiura (Stewart Island), witnessing the Heritage Expedition ship sail out of Bluff, I immediately knew that the lucky souls on board were at least going to the Sub-Antarctic Islands if not the great continent itself, and I was hit by a pang of immense jealousy.

It was a pleasant evening to watch it set out though as I stood by the chain link sculpture and way marker once more. I had a bit of time to head round the Foveaux Walkway around the coast and was aiming to make it to Lookout Point, but it was a longer walk than I thought and the light was reducing. I spotted a sickly looking mouse on the track that I presume had consumed something in the many pest traps around the place, and in the trees I saw a tui, a melodic song bird that I tend to associate with the north of the country rather than the south. At a wooden structure where I could see across to Rakiura on the horizon, I turned round and headed back to the car.

A long way from many places at the end of State Highway 1. Just a scattering of islands stand between you and the great southern continent of Antarctica. #bluff #southland #statehighway1 #southisland #newzealand #nzmustdo #ig_newzealand #roadtrip 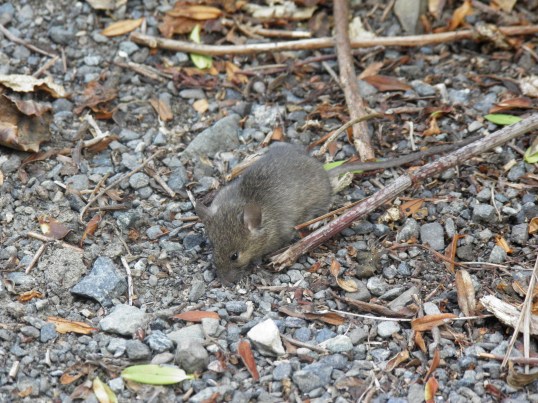 At the back of Bluff, a road leads up the hill to the Bluff Hill Lookout. By now late in the evening, there was barely anybody there. From this vantage point I could again see across the Foveaux Strait to Rakiura and it was also possible to see how narrow the isthmus of land that leads down to Bluff from Invercargill is. Bluff itself looked industrial as indeed it mainly seems to be, a frontier town that revolves around the comings and goings of the harbour. Heading north to Invercargill, it was dark by the time I found somewhere to park and reached my hostel. I’ve passed through Invercargill before and never really had any great desire to explore the city itself but it was a handy place to call it a night before hitting the Southland tourist circuit. Thankfully my hostel had its own restaurant and bar as I was hungry after all the fresh air.

I left Invercargill early the next morning as I had a lot of ground to cover. I headed north then west, cutting inland to cut round the back of the Longwood Forest Conservation Area. For the most part, I could have been anywhere in New Zealand, the rolling hillsides and fields being so typical of many parts of the country. As I neared Clifden, I took a detour off the main road to visit Clifden caves. The cave was in the middle of a sheep paddock and I negotiated the dung to reach the entrance and climb inside. This is very much an enter-at-your-own-risk style of caving, and as much I like going into caves, I tend to err on the side of caution when I’m on my own and never go beyond the lit section even though I had a torch with me. I’m an adventurer at heart, but the problem with solo travelling is that I often do things on a whim and nobody knows where I am if something goes wrong, so sometimes I have to listen to my brain when it tells me to be more sensible. 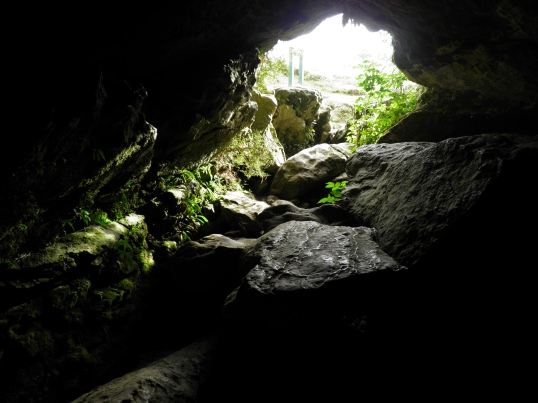 Back on the main road and it wasn’t too far to reach Clifden itself and here the back road joined onto State Highway 99 (SH99), the road that cuts down from Te Anau. I was now officially on the Southern Scenic Route, a tourist road that heads south along the Southland and Otago coasts and up to Dunedin, and I was excited to be driving it and visiting a part of the country I’d never been to before. The Clifden Suspension Bridge was the first stop on the drive and I was a little bit underwhelmed by it. Crossing the broad Waiau river it sits alongside the highway and is the country’s longest wooden suspension bridge. It was built to replace a ferry that used to carry stock across the river. On the track nearby, reams of sheep watched me as I walked by, crossing the bridge and then returning. 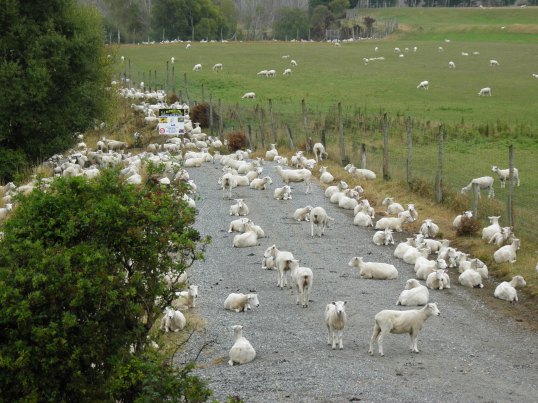 Reaching the Southland coast, under a grey sky, it was clear to see how wild this coastline could get. At McCracken’s Rest, a lookout over Te Waewae Bay, the sea looked calm with some steady waves rolling in, but the shingle shore and the battered dunes gave a hint of how bad it must get here. After initially having it to myself it wasn’t long before a group of motorbike riders joined me, and although this part of the country doesn’t get the level of tourists that some other parts do, I shared the many stopping points with plenty of other people, a stark contrast to the solitude and peacefulness of Rakiura. 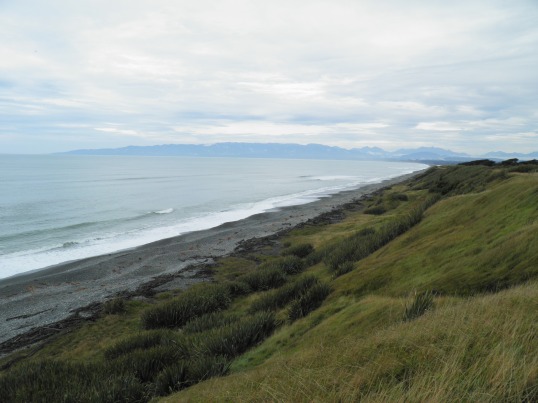 Following the coast east, I pulled in at Gemstone beach. This time I was able to get down onto the beach itself and stretched my legs whilst looking for gemstones. I’m not very good at identifying rock types, so whilst there were plenty of mixed colour stones, I have no idea what any of them were. The surf looked rough here and the cliff behind it was heavily eroded. In one spot, someone had even built a house into the eroded cliff, a little part of it visible through a natural hole in the rock. This great sandy expanse is still part of Te Waewae Bay and at the very end of it was Monkey Island, a small bump of land that is connected to the beach at low tide. When I reached there the tide was receeding but it wasn’t quite low enough to get out to the island without getting my feet wet which I wasn’t really in any hurry to do. By the beach is a freedom camping spot so there was a lot of people around and being a Saturday, there were plenty of visitors on the beach too. I watched some motocross riders race each other along the sand and behind them, above the sandstone cliffs, low cloud hugged the mountains behind. 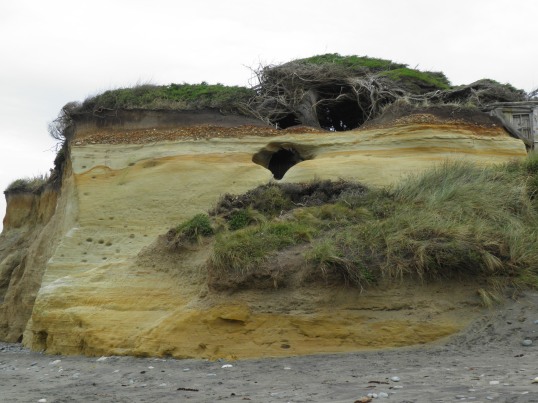 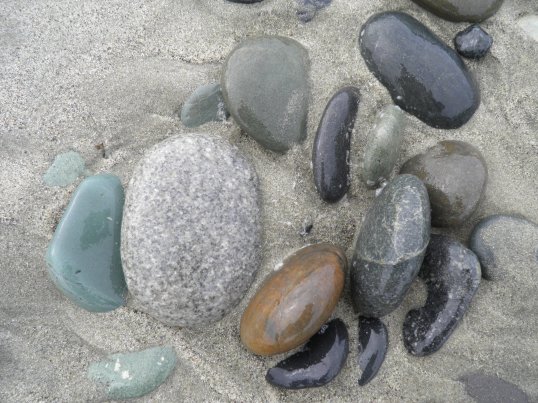 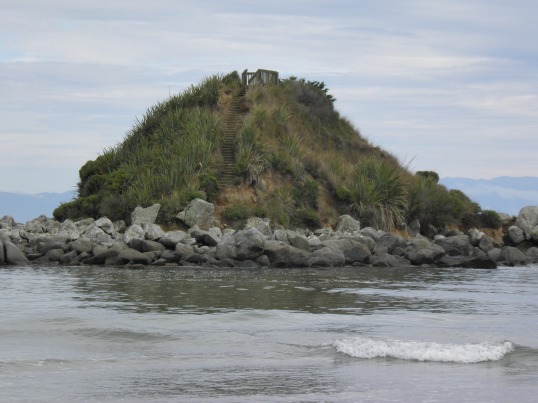 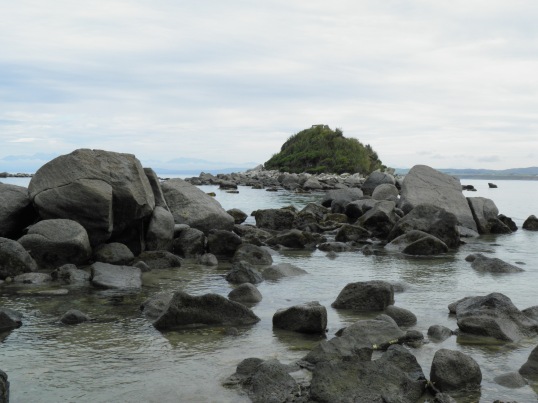 Keeping off SH99 for a while, I cut across some back roads and down a gravel track to reach Cosy Nook, a tiny fishing settlement snuggled into a small cove on the coast. The small houses themselves were sheltered but at the end of the road where it overlooked the wild coast, it was completely exposed to the brunt of whatever weather comes across the Strait. I could imagine the solitude being divine but I’m sure the residents have endured their fair share of storms blowing through here. Leaving it behind, it was time to find my way back to SH99 and keep heading east. By the time I reached Colac Bay, another broad sweeping arc of beach, the grey skies were starting to break a little and hints of sunshine were peeping through. Colac Bay is one of the region’s surf beaches and where the highway skirts the edge of the settlement, a giant sculpture of a surfer greets those passing by. Had it been better weather and had I had more time to explore, I probably would have taken a nice long walk along this beach, but as it was I already wasn’t covering as much distance as I thought I would so after only a brief stop to breathe in the sea air, I headed onwards. 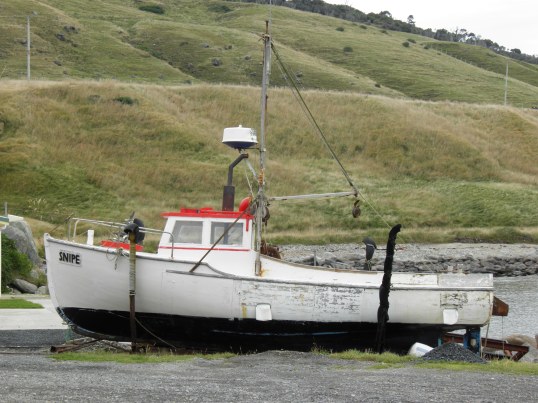 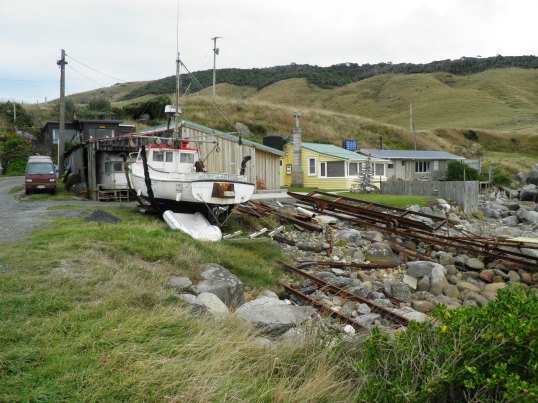 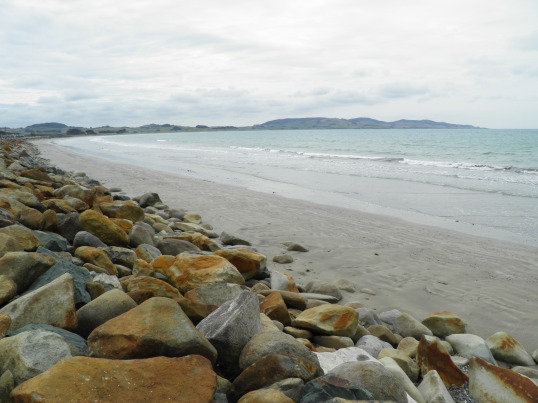 On reaching Riverton, I took the road up to the Mores Scenic Reserve where I could see across to the start of the sweeping bay that cuts round to Oreti and Invercargill. I took the track through the forest to the Hilltop Lookout which overlooked the Riverton coastline below. This was a popular spot as was the Howells Point Recreational Reserve at the point which I drove to next. I had wished I’d brought a picnic as this would have been a great place to have it. Riverton seemed to be a popular place for holiday makers and campers and I could see why. I really liked the place, with several beaches to choose from and a really chilled-out vibe, and I could picture myself coming down here for a Southland break in the future. Even with a lot of ground still to cover before reaching my night’s lodgings, it was worth taking some time to explore further… 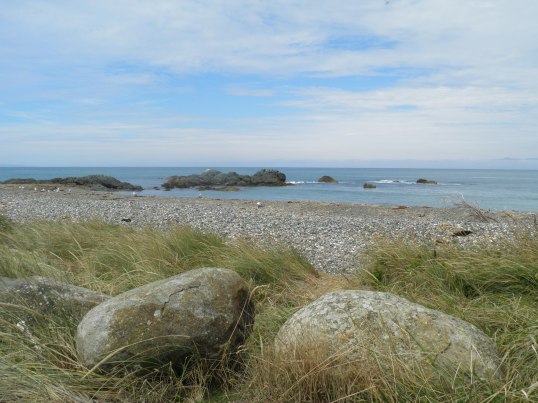