Archive for the tag “Arthur’s Seat”

Despite my protestations that Glasgow is a better city than Edinburgh, I do love a good visit to the Capital city. With friends in the past and present living there, I’ve had ample opportunities to visit, as well as attending theatre shows and exhibitions with my family throughout the years. From summer festivals to the winter markets and Hogmanay, there is something on all year round. So there was no doubt in my mind that Edinburgh would be a part of my trip home.

On a Saturday in the middle of June, I boarded the bus into Glasgow’s Buchanan Bus Station and managed a quick turnaround there to get on the Citylink bus to Edinburgh, and settled in for the journey looking out at the grey skies that persisted the whole way. I had a good bit of outdoor sightseeing planned, so was a little disappointed at the forecast that had been issued. Undeterred, I was looking forward to catching up with a couple of friends, and was met by one of them on getting off the bus. Not yet festival time, there was still a buzz in the air as we left St Andrew’s Bus Station, and I was reminded immediately why tourists love this place.

Arriving mid-morning, our priority was brunch, and we set off in search a cafe that my friend recommended. Amongst the grand buildings of George Street, we worked our way to Frederick Street where Urban Angel was, and after filling our stomachs, it was time to burn it all back off again. There are a few spots in Edinburgh to get the classic views, and Calton Hill is one of them. At the eastern end of Princes Street, one of a collection of paths leads up steps to the top of the hill where a collection of monuments and an observatory are scattered across its summit.

By now several weeks into my holiday over-indulgence, I was beginning to feel immensely unfit, a thought which raised some concerns for the multi-day hike that was coming up in just a couple of weeks. Pushing those thoughts aside, there is much to see from here, with views north over Leith and beyond to the Firth of Forth, and over the city centre to the south-west. Edinburgh Castle stands tall on its rocky promontory across the city and the distinctive peaks of the Salisbury Crags and Arthur’s Seat lie almost directly opposite.

The clouds were considering breaking up a little and small patches of blue pock-marked the sky above us. Edinburgh’s Old Town has a distinctive look about it, with many buildings of grandeure and turrets and towers aplenty. From here I could spy my next target, one of Edinburgh’s many famous landmarks, the Scott Monument. For all my previous visits, I had never realised that you could climb up it, so this would be something new for me. By the time we’d retraced our steps down the hill and along Princes Street to its base, the sun had come out with gusto and the warmth was welcomed.

Built to commemorate Sir Walter Scott, construction began in 1840, a few years after his death. Standing at over 60metres high, a series of spiral staircases lead up a total of 287 steps to multiple viewing platforms at different elevations. Overlooking the Princes Street gardens and Princes Street itself, it quickly became one of my favourite viewpoints of the city. With every level gained, the view grew more expansive, and even the tower itself was something to admire, with statues and detail adorning it at every level. With the clouds all but gone, we could see for miles in every direction. The only downside was that the higher we climbed, the narrower both the staircase and the viewing platforms got, making it quite awkward to negotiate the large numbers of people that were up the tower with us. Especially at the top, there was a queue to circumnavigate the platform, followed by a queue to get back down again. It was the height of the tourist season, a weekend, and a sunny day, so it was hardly surprising. 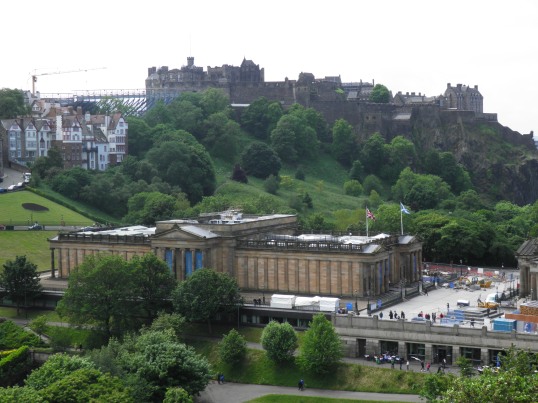 We took a quick look at the stained glass windows on the lower level as we made our way back down, and back out in the sunshine, my friend headed off for the afternoon and I wandered around some tourist shops waiting for the arrival of another friend. I found some Edinburgh Rock, a rather sweet and sugary candy that I hadn’t had since I was a kid, and parked myself up on the sunny roof space of the Princes Mall until my friend arrived. We made a beeline for the Royal Mile which was packed with locals, tourists and buskers. In direct line with Edinburgh Castle at its western end, the High Street section is a broad pedestrian thoroughfare, lined with bars, restaurants and tourist shops, and the outdoor seating that sprawled outside was packed at every venue. 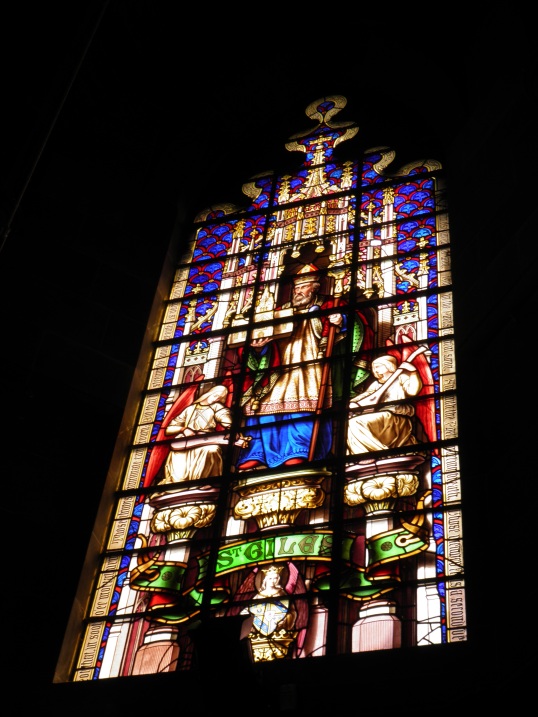 We watched a busker swallow a sword before heading off down hill to the lower Royal Mile which is open to traffic, and at its end, Holyrood Palace and the relatively recent addition of the architecturally unique, Scottish Parliament building. Last time I’d visited, my friend and I had gone inside the Parliament building for a tour, and at certain days and times, this is a regularly offered possibility depending on sittings. But our target on this occasion was the ice cream van parked up at the bottom of Salisbury Crags. By now it was very warm, and I was not dressed for a hike. I had been keen to get up Arthur’s Seat, a climb I’d only done once before, but on such a warm day, and having already found Calton Hill to get me in a puff, I was suddenly in two minds.

My friend suggested we head only as far as the St Anthony chapel ruins just a little up the hillside, and that seemed more than fine by me. Munching on our ice creams, we took our time and enjoyed the view over St Margaret’s Loch below us. After a respite, and watching the other walkers push on upwards, we opted to go up to the top of the Crags and see how we felt. It was a busy place to be with friends and families, walkers and joggers making a steady line both up and down the hillside. Once again, after having a rest on a lower plateau, we decided we’d gone all that way up, we might as well keep going, and so we summited Arthur’s Seat which was absolutely packed. The last time we’d come up here, we had taken an alternate route up, so it was nice to have done it differently. Once again, the view is phenomenal, looking out over the city to the west and the Firth of Forth to the north. 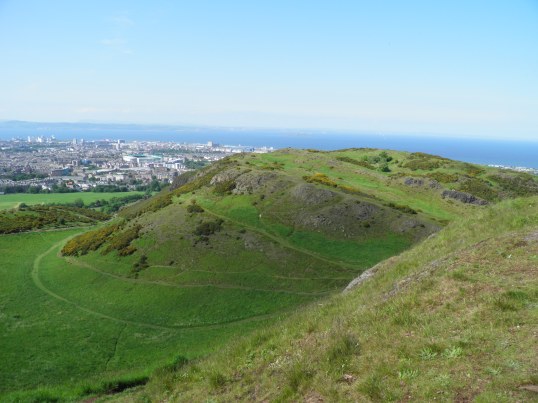 We had plans to meet back up with my other friend that night, but there was still plenty of time ahead of us. Returning to the Royal Mile which is littered with closes (alleys), we went to Mary King’s Close, one of many parts of Edinburgh that is haunted. Unfortunately they were booked out for a few hours, so instead we headed up the hill to Camera Obscura, a place that I hadn’t been to before. Dating from the mid-19th century, it has become an interactive world of illusion with the Camera Obscura itself still occupying the top floor. The roof has an outdoor space providing yet another view point of the city and as the demonstrations of the camera are timed, we had a little time to enjoy the vista before heading indoors. 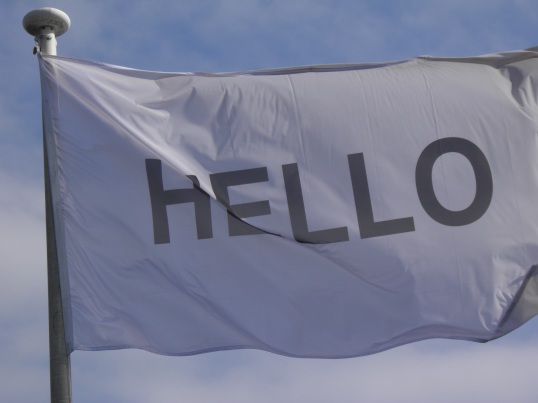 After the camera’s demonstration, we worked our way down the six floors filled with optical illusions, negotiating the maze of mirrors and a vortex tunnel. Even as an adult, this was fun, so although the entrance fee is rather pricey, there was plenty to look at and explore, and worth doing once if you have a lot of time in the city. We took silly photos in the various interactive sections and wandered round the large gift shop at the bottom before heading off in search of dinner.

We chanced our luck at a rooftop Thai restaurant on Castle Street and were rewarded with a table on the balcony. Presumably named after the large river that runs through Bangkok, Chaophraya was fantastic. We sipped on glorious cocktails in the evening sun, and enjoyed delicious food before it was time to head back to the Royal Mile. The restaurant was upstairs off Castle Street, and walking down this street, we were overlooked by the greatness of Edinburgh Castle. There was still hours of daylight ahead, being only a few days away from the longest day of the year, but the lowering evening sun cast a different light on the old buildings as we headed up the hill to the Royal Mile. 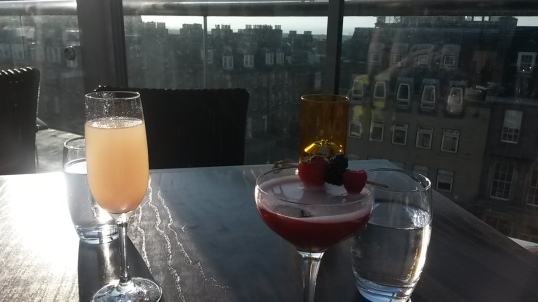 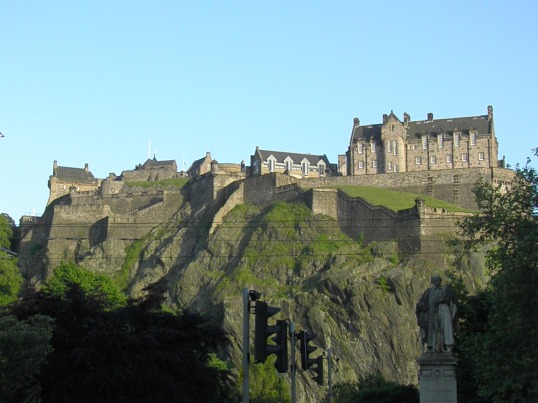 Catching up with my other friend again, the three of us joined the crowd at the meeting place for our City of the Dead tour. Edinburgh, like many old cities, is rife with ghost stories, and there are plenty of opportunities to go ghost hunting. Another activity I’d not done here, I’d managed to convince my friends to join me on the hunt for the Mackenzie Poltergeist, supposedly one of the World’s most documented poltergeists. As a regular solo traveller, I will do almost anything on my own quite happily, including gallivanting across the world and volunteering in countries where English is not the first language. But doing a ghost tour is not one of the things I would do on my own, so convincing people to join me had been the first step.

From the very beginning, I knew it was going to be good. Our tour guide was an absolute Character with a capital C. He really made that tour, and was amazing at building up the hype and buzz around the haunted graveyard. Our destination was Greyfriars Kirkyard, perhaps more famous because of the fable of Greyfriar’s Bobby, a little dog that wouldn’t leave the side of his master’s grave, resulting in him getting his own statue on the street outside. But amongst the ‘true’ story of the ‘wee dug’, was tales of death and crime and Harry Potter. Indeed, for those who read the books of J K Rowling, who wrote them nearby, there are a lot of familiar sounding names related to this graveyard.

The culmination of the tour is entering the locked section of the graveyard, the Covenanters Prison, where the poltergeist activity is said to be at its highest. With regular reports of people being physically injured, our guide had us in the palm of his hands by this point, having expertly weaved his tale of the history of the site. The tension amongst the group was palpable as we crowded into a vault near the entrance. To find out what happens next, I cannot recommend this tour enough. For us though, afterwards we made our way back to Waverley Station to see off one friend, then St Andrew’s Bus Station where I left my other friend behind to take the bus back to Glasgow, more than satisfied with my day in the Capital.