Archive for the tag “botanic garden”

When faced with the choice between a cheaper indirect flight and a dearer direct flight, I would normally pay a little bit more for less airport time. Hanging around in airports, whilst good for people watching, is a bane of travelling that I would happily eliminate, with hours of my life having been wasted in these culture-less man-made boxes. However, on this occasion, the direct flight out of Cairns was first thing in the morning, and when I booked my flights many months earlier, I had naively thought I would want the extra time in the Great Barrier Reef‘s gateway city, and for that reason I’d chosen to book an unknown regional airline, Air North, which took off at a much more civil lunchtime slot. As it turned out, I really didn’t get Cairns, and found myself spending the morning before my flight at the hostel and the nearby mall, eager to get away from the rather drab city. But I didn’t regret my choice of airline, and although it meant more airport time than I’d needed, I was actually glad to experience the route it took.

Leaving Tropical North Queensland behind, we were soon to leave land behind, flying over the Gulf of Capricorn, a large expanse of water that separates the top of the state of Queensland with the top of the Northern Territory. When we next hit land, there was a lot of bush but also a lot of red desert. It was exciting to see the arid landscape I’d seen so many times on the television. Our indirect flight landed in a tiny settlement called Gove. The runway was surrounded by red desert and it looked like we were in the middle of nowhere in the Outback. The only annoying thing about it was that we all had to disembark, and go through security in the tiny Gove airport building before being allowed back on the plane. Despite having just come from Cairns, I was selected to be taken aside for explosives screening. I was surprised at how many people were getting off in Gove and how many people were getting on. It was clearly a transit hub for the local area. But finally we were on our way to a city that I had longed to go to for some time, the Territory’s capital, Darwin. 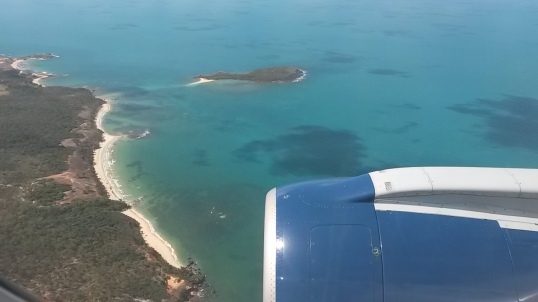 People in Queensland had told me to expect a massive culture shock when I got to Darwin. A comparatively small city, it has the largest percentage of Indigenous Australians compared with any other city in the country. The way people talked about the place, they made it sound like it was a poor and ‘backwards’ city, and I wasn’t sure what I was going to find when I landed. What I discovered though, was a city that I loved, and one that I would have loved to have had more time in. Over the course of 3.5 days, I packed as much of the local area in as I could, but with the benefit of a car on another occasion, I would love to go back and do more.

It was evening by the time I’d checked into my accommodation, and I was quick to dump my stuff and get out to the nearby Bicentenial Park where locals were out for an after work stroll. It was a well-maintained stretch of parkland with some views out over the wide expanse of Darwin Harbour. As the sun lowered, I wandered around passed packed bars, and up the main shopping street of Smith Street where I found a night market that the driver of the airport shuttle had told me about. There was a plethora of stalls selling mainly Asian-inspired food, and I tucked into a delicious meal of pad thai and sangria. The heat was worse than Queensland, and I struggled both outdoors and indoors. I escaped into the air conditioned space of a pop-up art gallery that was open late, hiding out there till I was guided towards the exit at closing time, sweating my way back to my hostel dorm, who’s air conditioning was wholly ineffective. 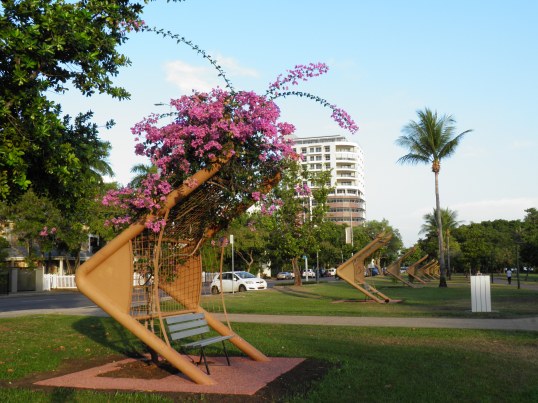 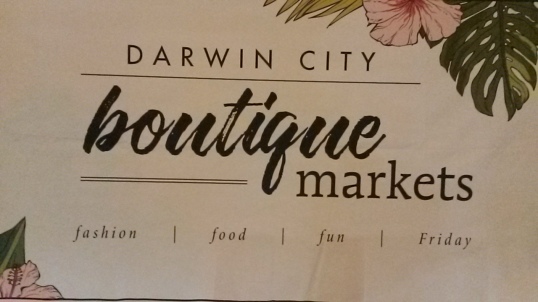 I prefer to do most of my city exploring on foot when I’m abroad, but in the tropical climate and with Darwin quite spread out, I acknowledged that this wasn’t going to be sensible here. With the rise of a hot sun the next day, I bought myself a ticket for the city’s hop on-hop off tour bus which gave me 24hrs use of their services. Up the length of Mitchell Street, packed with bars and youth hostels, the bus headed towards Cullen Bay, an upmarket part of the city with swanky apartment blocks overlooking a gorgeous marina. Round past the casino and Botanic Gardens, I got off in the suburb of Parap which has a Saturday market. The food options were almost the same as the previous night’s market and this was interspersed with fruit & veg and local crafts. After grabbing breakfast and having a wander around, I jumped back on the bus, completing its loop via Stokes Hill wharf and back around, getting off again at the Botanic Gardens. 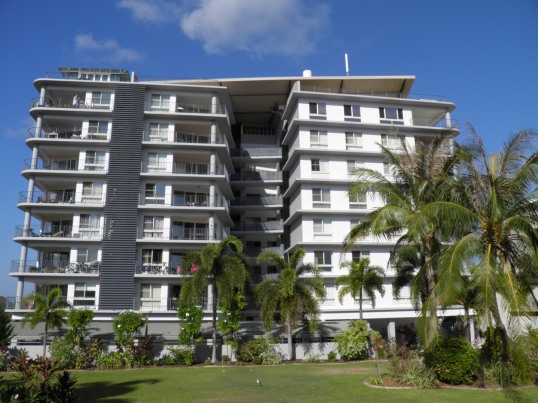 I love visiting Botanic Gardens, some being better than others. There were some interesting patches within Darwin’s gardens, but exposed to the constant sunshine, I was going through water like crazy. Near the entrance was a beautiful fountain in a pond, and the vegetation was a mixture of colourful flowers and tropical canopies. Walkways wind through the various sections, revealing a waterfall and some trees I’d never seen before, including a chunky and nobbly boab tree. 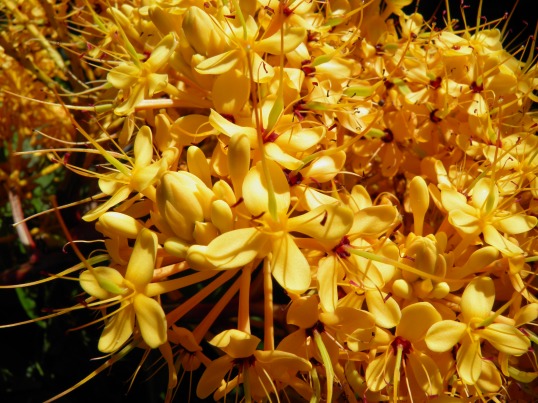 I always make a point of visiting the Botanic gardens when I go to a new city. This waterfall was hidden down a short bush walk in Darwin's Botanic gardens. #waterfall #botanicgarden #darwin #topend #tourismtopend #ntaustralia #northernterritory #australia #seeaustralia #ig_australia 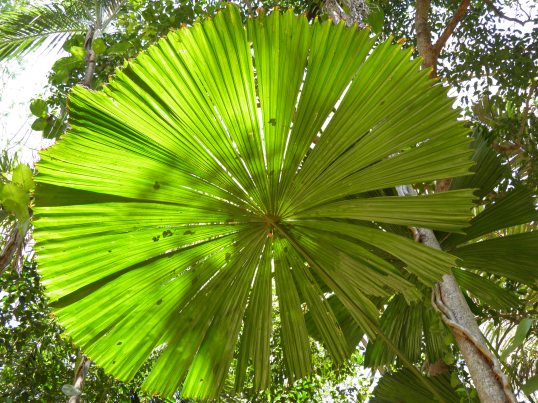 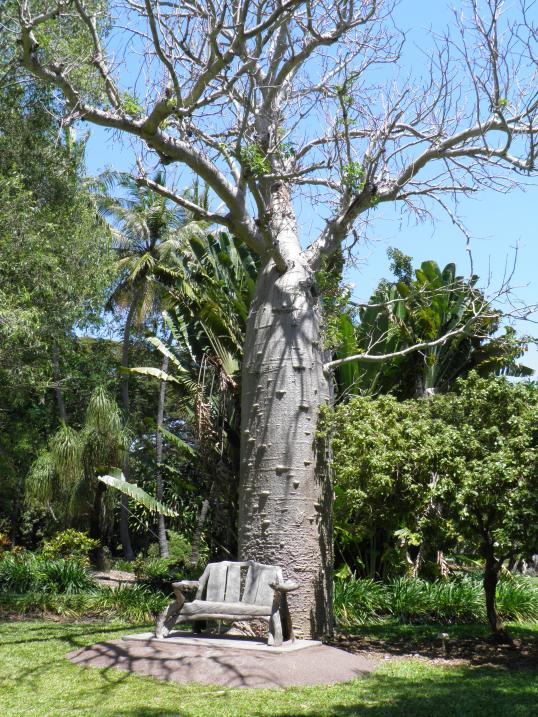 Eventually I cut to the coast at Mendil Beach where I had my first interaction with some Indigenous Australians. I had already seen where some of the comments about Darwin by the Queenslanders had come about: there were many drunk Aboriginals wandering the city’s streets, and all the beggars that I had seen had also been Indigenous people. Here at the beach, a group of ladies sitting in the park said hello and I returned the greeting. They quickly went back to their native tongue as I passed. Under the beating heat the sand was too hot to walk on and it was deserted.

A path through some much desired shade brought me out a little along the coast at the Museum & Art Gallery of Northern Territory. Being one of the bus stops for the hop on-hop off service, I had planned on jumping back on the bus here and moving on, but at the last minute I decided to head inside. The museum is free to enter so I used this as an excuse to utilise the building’s air conditioning. In the foyer was a display of painted car parts by an Indigenous artist, and a little pond at the side had a resident hog-nosed turtle floating about. Apparently, Indigenous artwork is much-loved by European visitors. It is certainly a very distinctive style and I myself loved many of the artworks that I saw over my Australia trip. Had I been rich and a homeowner, I could have bought a whole personal gallery whilst I was there. 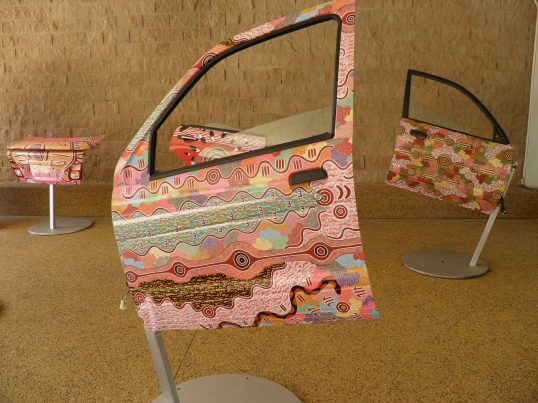 Aside from the gallery of artwork, there was a display of local fauna which of course included all the venomous creatures that reside in the territory, but what was most interesting to me was the area dedicated to Cyclone Tracy that devastated Darwin on Christmas Eve in 1974. I hadn’t heard about this disaster before, but living as I do in Christchurch, New Zealand, a city devastated by two earthquakes, many of the photographs of the cyclone’s damage looked all too familiar. This city too had suffered at nature’s grip and been rebuilt.

In the afternoons, the hop on-hop off bus has an added section to its loop of the city, heading past Fannie Bay to East Point Reserve. This was a popular area with locals, and one that I would love to come back and explore in depth. It was quite a way out of the city centre, and I was reliant on the tour bus to take me back. Unfortunately the last one left in daylight hours, and so I had just a couple of hours to explore. From the military museum where the bus stop is, I meandered to the cliffs of the coastline and followed the walking track back towards Fannie Bay. There was plenty of evidence of erosion along the cliff edges, and signs warned of crocodiles in the vicinity. 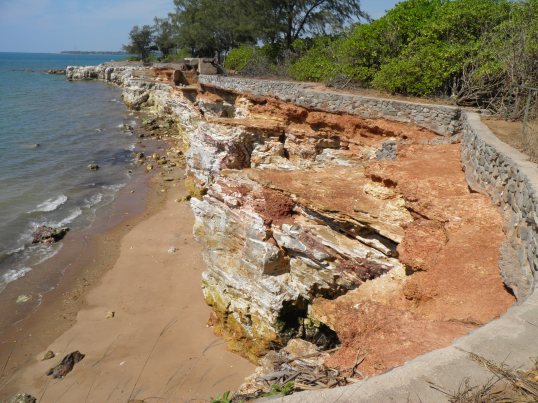 Once overlooking Fannie Bay, the skyline of Darwin was evident in the distance, and the beach was long here, being well used by families that were camped up under the trees cooking barbecues with friends and family. Most people were congregated around the strip between the beach and Lake Alexander, and presumably drawn by the smell of food, there was a mob of birds of prey swooping overhead. The smell of food was making me a little hungry and seeing the groups of people enjoying themselves together made me feel a tad lonely. By the time I’d wandered back to the Military Museum to catch the last bus back to the city, there was a lone bagpiper playing outside in memorium for a board member that had recently died. No matter where I am in the World, my little Scottish heart always bursts with national pride at the sound of a bagpipe. 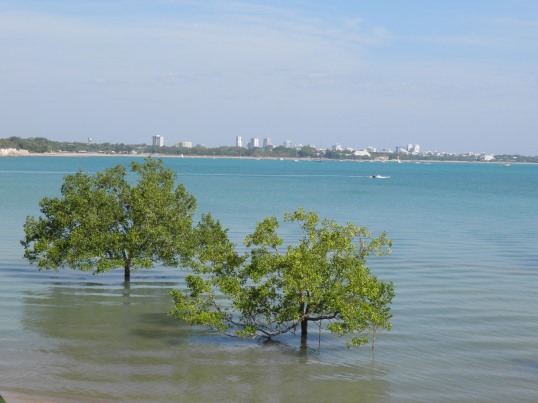 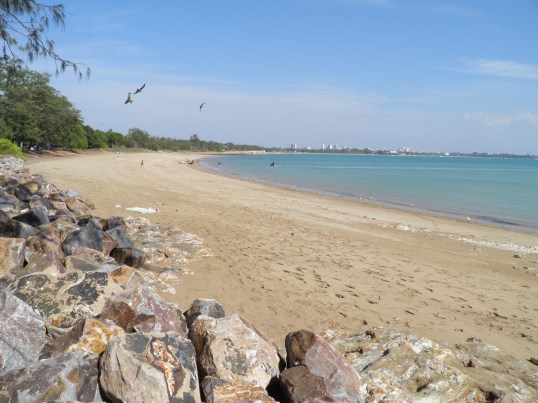 Back in the city, I found a dumpling store down an alley and procured some yummy food to take to Bicentennial Park and eat. With the sun setting, it was just a matter of finding the desired vantage point to watch the sun go down. I’d been spoiled in Queensland with all the sunsets I’d witnessed there, so the Northern Territory had a lot to live up to. The sky burned a deep red as the sun’s orb faded below the horizon. It had been a good introduction to the city, and I’d made note of those places to go back to. But the next day I had an early rise to visit one of the nearby national parks. There was definitely much to see in the Northern Territory. 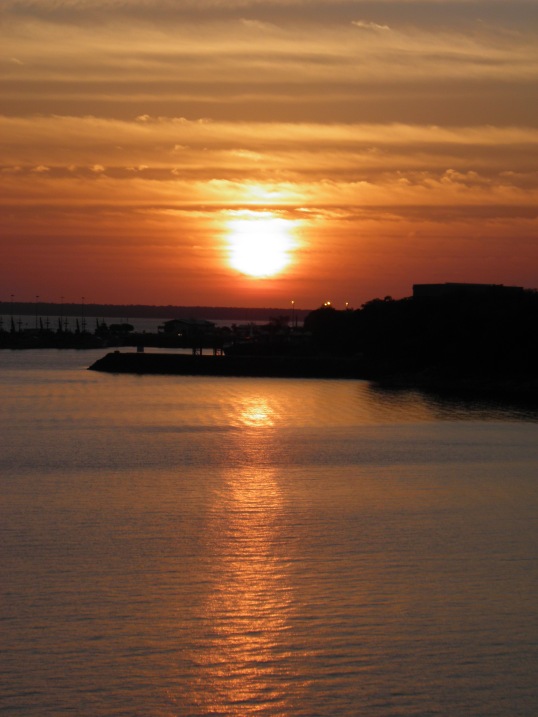