Archive for the tag “Glen Coe”

The wild expanse of Rannoch Moor spans 50 square miles (130 square kilometres) in the Highlands of Scotland, and accounting for the most exposed section of the West Highland Way (WHW), I had been fervently monitoring the weather forecast and keeping my fingers crossed. This was not a day for rain. I’d studied the map of my route, and looked at mile after mile of totally exposed moorland.

I awoke on day 5, and looked out my window at the Inveroran hotel to see that not only was it dry, but there were vague patches of blue sky. I struggled to eat my breakfast, by now sick of the amount of food I’d been trying to consume over the past few days, and pulled on my hiking boots along with all the other guests of the hotel, and set off on what turned out to be the most stunning section of the whole hike. Curling round the river at the head of Loch Tulla, a sign at a forest lodge, denoted the history of the old military road that ran through the area, and then through a little gate, and past some trees, I found myself at the start of the moor. 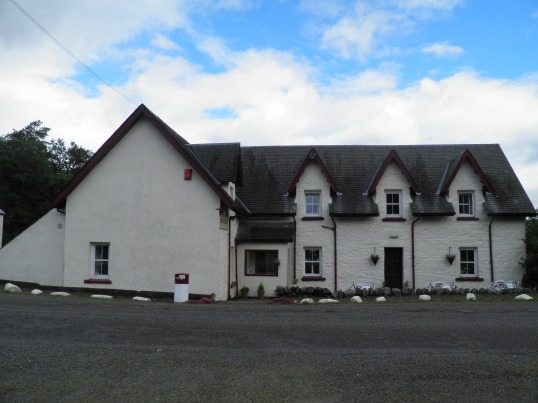 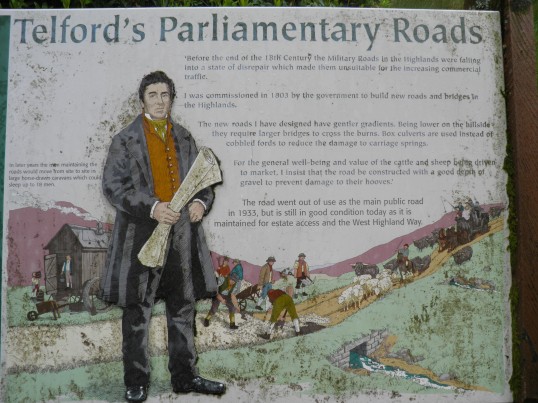 The clouds were not far away and I silently hoped they stayed where they were. It was an easy and well trodden route to follow, and there were plenty of other hikers both ahead and behind me. With hills in every direction, and the flowers and birds of the peat-filled bogs beside me, there was plenty to keep my attention. I watched a little chaffinch for a while near a small plantation whilst sitting on an old arched bridge. A collection of lochans reflected the clouds above on their surface, and they grew dark as the surrounding skies grew dark. 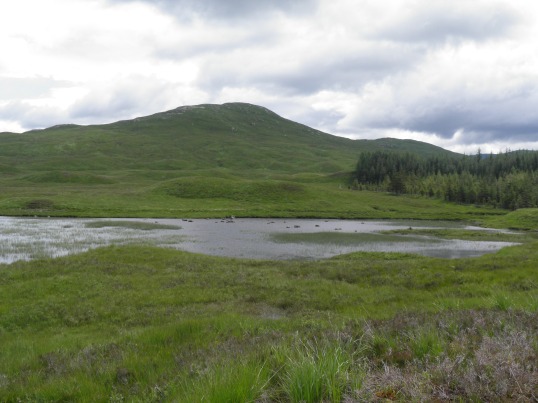 I found myself at Ba Bridge rather quickly, and passed the groups of people that had stopped there for a rest. One of the larger rivers of the moor ran through here, but beyond it, the marshland, streams and mini-waterfalls next to the path were calling me, as was the solitude that I craved away from this busiest of sections of the WHW. The route of the day’s hike really skirts the edge of the moor, with the bulk of it spreading off to the east, intersected by the A82 road, and the West Highland railway line to the far east. On paper, this section of the route looked immense, and I found it to be staggeringly beautiful in its wildness. However, I had been looking forward to traversing this section due to what I’d seen of Rannoch Moor from the drive south from Fort William, and I was disappointed to discover that I wasn’t getting to see the vast lochs and heather-clad peat bogs that I’d spied from there. This truly was the edge of the moor, and in no time at all, I reached a small peak, and rounded a corner to find myself in sight of the Glencoe ski-field and the Kingshouse hotel, a 10 mile (16km) walk from the Inveroran hotel that I’d left that morning. As beautiful as it had been, the road gives a better view of this stunning moor, and as I later discovered, the train ride gives the best opportunity to admire it in all its glory. 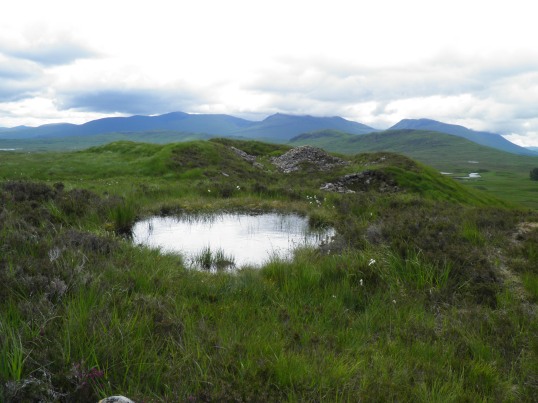 Now, I was looking up Glencoe, and the clouds ahead looked foreboding. Sneaking into view was the distinctive peak of Buachaille Etive Mor, one of Scotland’s most famous and photographed peaks. I picked my way down the hillside, and left the WHW briefly to head up the track to the Glencoe Mountain resort where the cafe at the base of the ski lifts served me a gigantic mug of hot chocolate piled high with marshmallows. It was just what I needed. There was a surprising amount of people at the ski resort considering both the time of year and the weather. As I crossed the large car park to head down the track to rejoin the WHW, a kindly soul stopped to offer me a lift. But there would be no cheating on this hike, and I thanked her then declined. 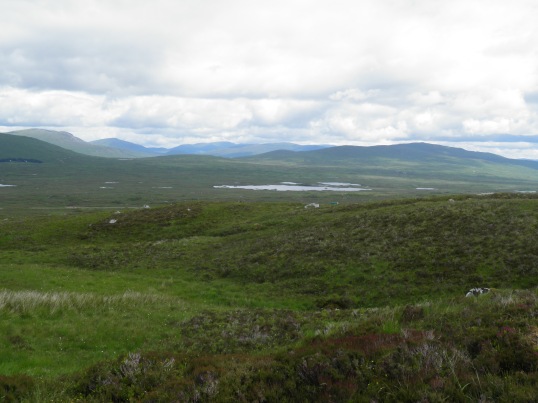 To my left, Buachaille Etive Mor dominated the skyline, looking dramatic as ever with the looming dark clouds that hovered over head. Crossing a river, the track greets the A82 by a large sign and a trio of flags that billowed crazily in the wind. This is the busiest road crossing of the whole hike, this section of open road having a speed limit of 60 miles per hour. This is not a crossing to do whilst distracted. Once on the far side, it was an easy walk to the Kingshouse hotel. This historic hotel is a popular stopping point both for drivers on the road and hikers in Glencoe. The WHW skirts round the side of it, and over a bridge before turning left onto yet another old military road. 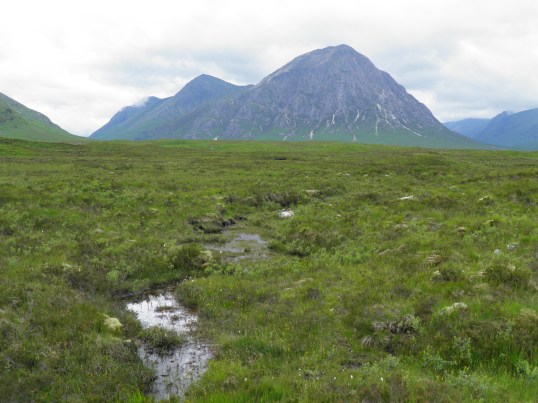 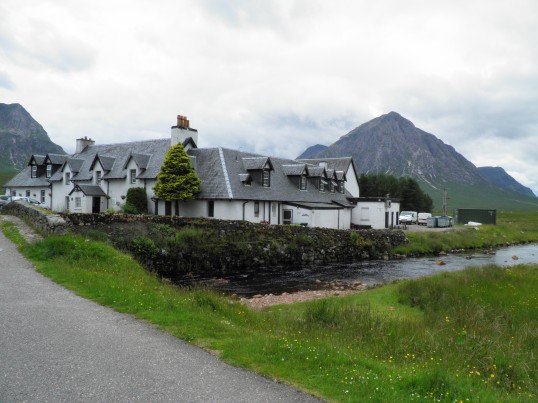 From here onwards, Buachaille Etive Mor shows its famous pyramidal outline, and ignoring the traffic that thunders past its base, it is a beautiful accompaniment to the hike. I’d spent the whole day on the look out for red deer, thinking this was my best chance of spotting them, but now so close to the A82, it seemed that my chances were waning. Passing more lochans and peat bogs, the path climbed a little, withdrawing itself from the busy road below, before sadly descending back to its side, where the WHW hugs the road side for a while. There were plenty of cars parked near a copse where the A82 curves up another valley. By now Buachaille Etive Mor looks very different, and a walking track up the munro leaves from here. There was a flurry of activity here as tourists paused for photos, and I was keen to get back to the wilderness and solitude again. 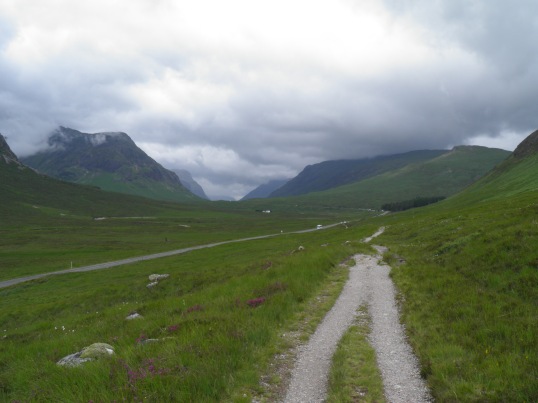 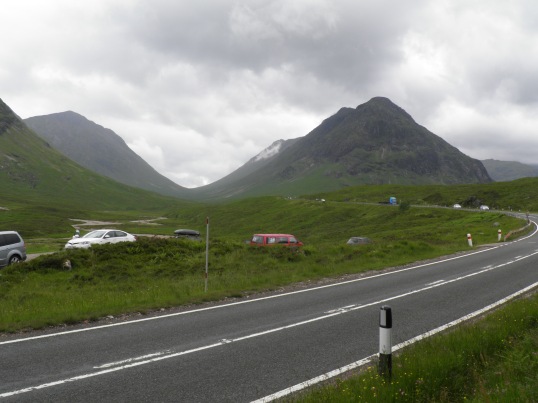 The WHW leaves Glencoe behind by traversing the hillside and winding its way up an altitude gain of 259 metres, on a section known as the Devil’s Staircase. Depending on who you speak to, or where you read, this has a reputation as being one of the most gruelling sections of the WHW. As a regular mountain hiker in New Zealand, I really didn’t think this section was as bad as it had been made out. Certainly after a long day of hiking, I could see it could be tiring. My brother walked all 96 miles of the WHW for charity in just 48 hours, and I could see how this would have been a gruelling climb for him and his friends at this stage of the walk. As it was, it zig-zagged up the hillside, the biggest annoyance being the mountain bikers who were attempting to negotiate the rocky path at the same time. 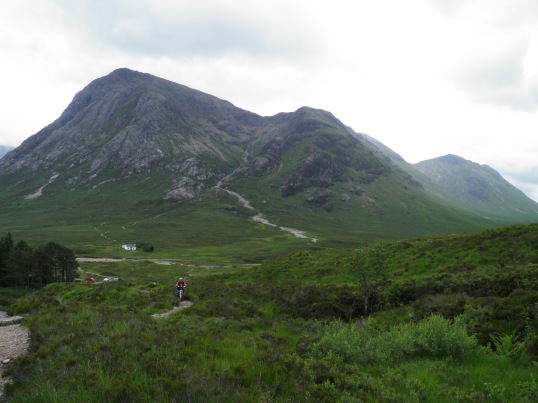 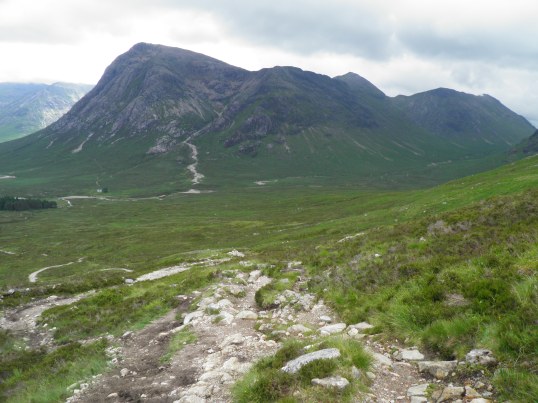 On reaching the summit, I paused to take in the view and have a bite to eat, but just as I turned to bid Glencoe goodbye, the heavens finally opened and I was forced to kit up in my waterproofs for the long descent into Kinlochleven. Supposedly from this summit, Ben Nevis should be visible, but between the low clouds and the falling rain, I had no idea where it was supposed to be. Like Rannoch Moor, this section was fully exposed to the elements with not a whiff of shelter in sight. I had been lucky to avoid the rain as long as I had, and thankful that whilst the shower was heavy enough to be a nuisance, it was relatively short-lived, wearing itself out after just 15 minutes. A light drizzle remained for a little longer, but the clouds on the mountains across this new valley looked dramatic as they hugged the summits. 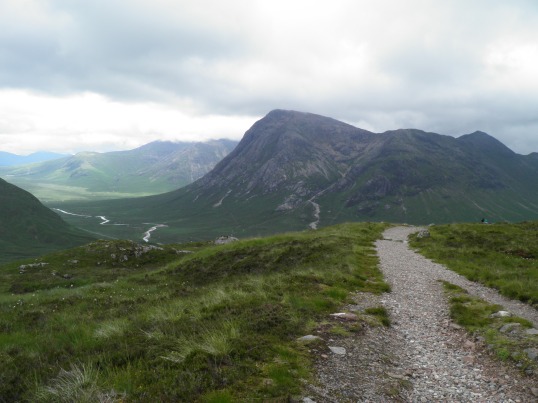 Picking its way down the hillside, a pretty little footbridge across a river is reached, and then the track curves round the contour of a hillside. It felt like Kinlochleven was within reach, but still it remained deceptively out of sight. The odd building here and there could be spotted, and some pipelines scarred the landscape below. There was the sense that civilisation was about to be reached, but growing tired towards the end of a 19 mile (30.5 km) hiking day, this final section felt like it would never end. Passing a dam, it then curled in a large arc within a woodland, and through the trees, there were glimpses of green in every direction. Occasionally I could spot signs of quarrying and digging on the nearby hillside. Finally though, the path joined the route of the large pipes of what used to be an aluminium smeltering plant, and headed directly towards the buildings of Kinlochleven. 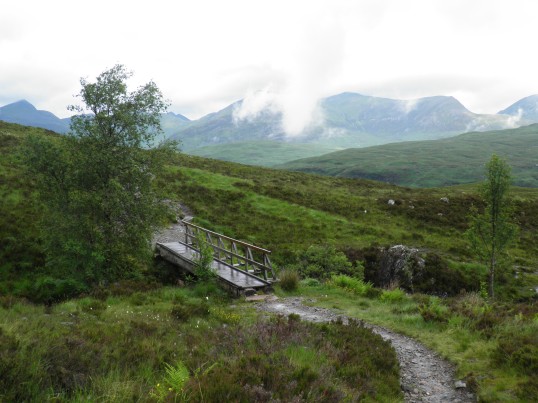 Ignoring the turn-off to my accommodation, I opted to stick with the WHW until reaching the village itself. The track crossed the river Leven and quickly I found myself walking along a residential street past people’s houses. It then cut through a little woodland nestled on the river bank, and in a matter of minutes I found myself at the bridge in the middle of the village. Whilst the WHW turned right, I crossed back across the river to the left, and snaked round the road past the Ice Climbing centre to the Blackwater Hostel, my stay for the night. I’d booked the cutest little pod for the night which consisted of a mattress, a microwave, a fridge and tv, all packed tightly into a cosy wooden log-shaped cabin. It was compact but it was all that I needed, although I had to hire a sleeping bag as I’d not carried any bedding with me. 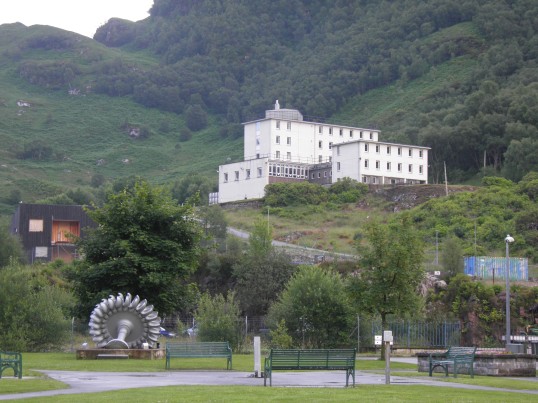 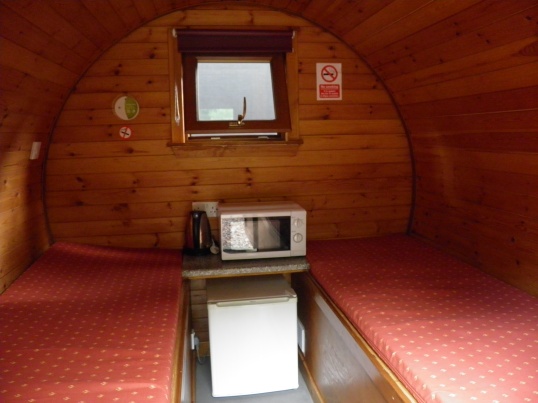 I had a brief wander around the village, stocking up on breakfast supplies at the nearest grocery store, and then joyously found a local takeaway serving delicious pizza that I took back to my cabin. Finally resting my feet, I snuggled up in my pod with the tv for company, and felt at ease, if not a little saddened that I had just one day of adventure left. There was just the last night of sleep between me and my final destination.