Archive for the tag “rainforest”

The Village in the Rainforest

If it hadn’t been for 2 incredible excursions over 3 days, I would have really hated Cairns. The city itself was soulless and a real let down after all the beautiful places I’d stopped at on route up the Queensland coast from Broadbeach. After being left with nowhere open to get breakfast before heading off, there was a 30 min drive round various hotels for pick-ups and out of Cairns to the lower station of the Cairns Skyrail. The village of Kuranda is nestled amongst the rainforest outside of Cairns and is perfect for a day trip away from the city. It can be reached either by train from central Cairns, or via a cable car from north of the city, and everywhere you read about Kuranda it is recommended to go there one way and come back the other. I decided to take the cable car there and come back on the train, both of which need to be booked in advance to save disappointment.

With no eating allowed on the cable car and a timed slot to ride it, I shovelled a muffin from the cafe into my mouth as fast as I could stomach it. The ride up through the rainforest is estimated to take 90 minutes including a couple of stops on route, so I wasn’t sure when I’d get to eat. I had a mother and daughter in the cable car with me, and from the moment we left the station, we were all in awe looking out of the window. The lower portion of the ride starts the climb up into the trees, with a view over the rolling hillside and out over the coast behind us. From the very beginning, I loved this experience and it was well worth the money. 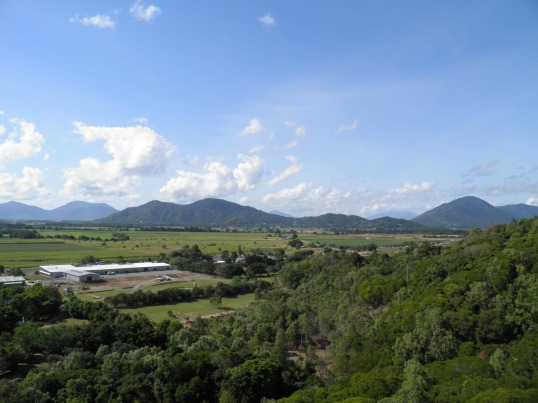 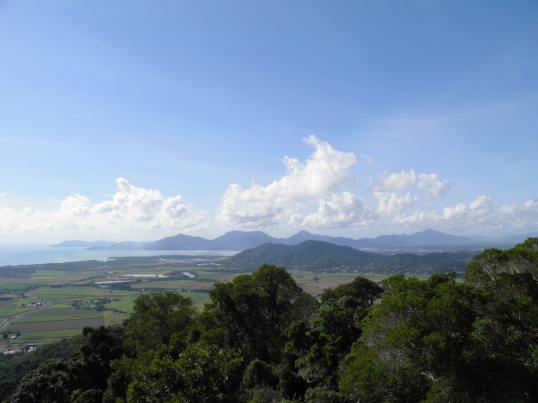 Once up the initial hill, the first stop was Red Peak station at 545m (1788ft), surrounded by rainforest. Here, there was a raised boardwalk taking you through the mid-layer of the canopy. It was short to walk round it on your own, but I opted to wait for the guided tour that ran at regular intervals, which was informative and added a whole new level of interest to the surroundings. Life in the rainforest is all about competition, with the plant life competing against each other for sunlight and nutrients. It is incredible to see the amazing adaptations that some plants have undergone to out-do their neighbour, from growing into them, to literally strangling the life out of them. 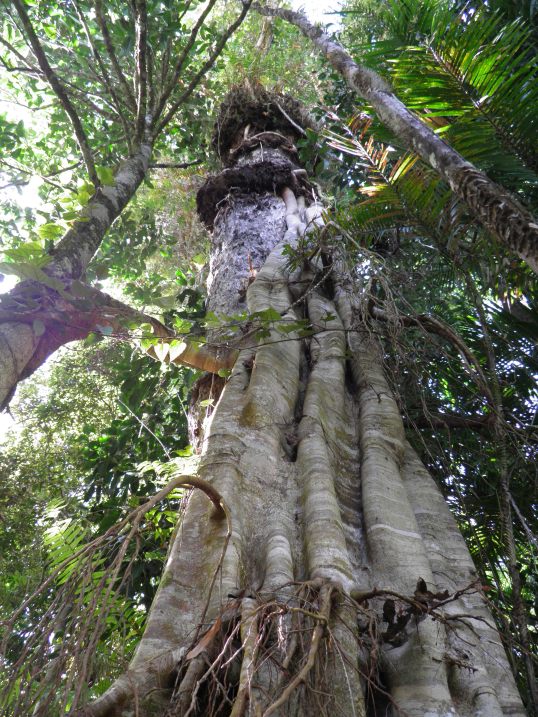 The next section of the cableway was the longest, and here the line was just above the top of the canopy. It was a stunning sight, with the green of the rainforest disappearing in all directions over the nearby hills. Below us, there was the occasional gap in the foliage allowing an insight into the forest below, and there was a constant thrum of the forest life mixed with the workings of the cableway. The total length of the cableway is 7.5 km (4.6 miles), and there was so much to take in. As we approached the next station, the waterfall that it is named after came into view. I can imagine that after a tropical storm, this cascade would be amazing to view in all its glory, but when I was there, it was a relative trickle compared to some of the photos I had seen of it at its best.

The Barron Falls station had a walkway to 3 different lookouts. I could see over to the train line on the far side of the large gorge that I would be taking to go back to Cairns later that evening. Unlike the last station, this one felt busy with each lookout a jostling match for the prime spot to take photos. I took my time but was overall a little unawed with the view. That said, it was still a good opportunity to get out amongst the trees of the rainforest and the depth of the gorge was still impressive. 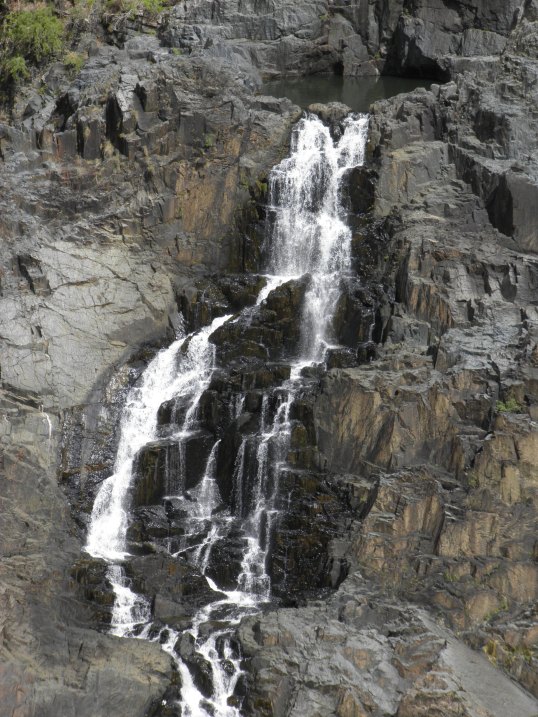 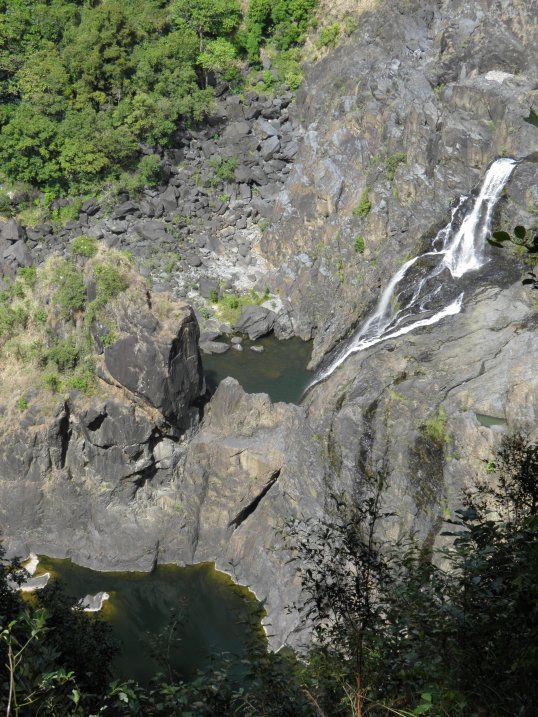 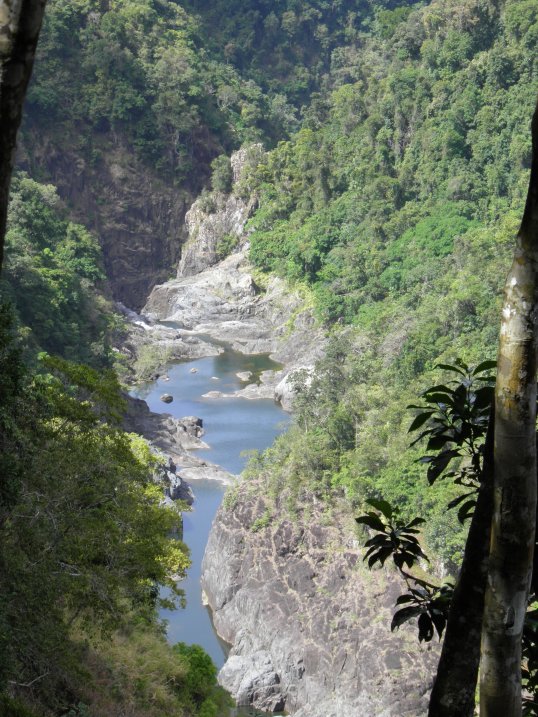 The final section of the cableway cut over some more trees before swinging down over the wide Barron river, over the train line and into the Kuranda cableway station. The main street of Kuranda is just a short uphill walk from the station, and it is full of artisan and craft shops, lending the place a slightly hippy feel. There was some beautiful art here, and had I had my own place and a lot of money, I could have gone to town here. Instead, I had to be satisfied with just ogling at it. I’d been told by the driver of the shuttle bus about mango wine, so when I came across a woman selling the stuff out of a window, I took no persuasion whatsoever to set about sampling the stuff, eventually settling on a bottle of mango sauvignon and a bottle of sparkling mango. It had seemed like a good idea at the time until she handed me the bag containing the two giant export boxes and I realised that not only did I have to carry these for the rest of the day, but I also had to carry them around Australia for the remaining 18 days of my Australian trip. 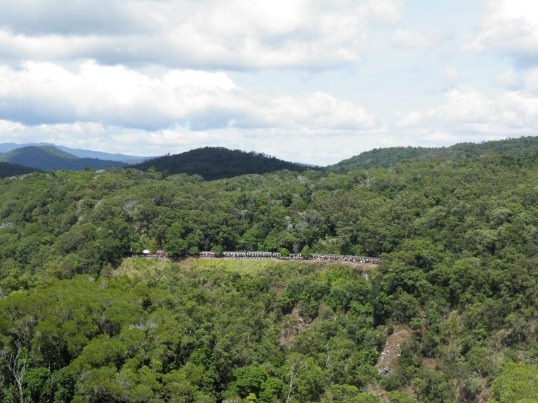 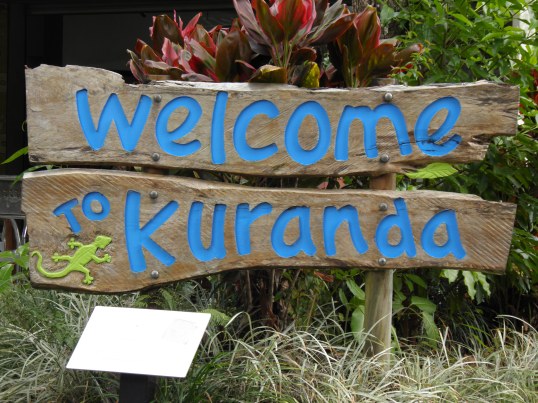 Undeterred and a little tipsy on the mango wine in the heat, I kept going round the shops, eyeing up the various food options to choose from. Everywhere was busy, and I was looking for something unusual. Inside the Rainforest Market I found a creperie that made savoury crepes and settled on one of the many choices to have for a much-needed meal. Afterwards, across the road there was another market, the Heritage Market, out the back of which I stumbled across a plane wreck being swallowed by the jungle. The sign next to it explained that it had been staged, but it looked like a genuine plane wreck, and reminded me of the movie Crocodile Dundee. Peering inside it, the vegetation is doing a good job of claiming the wreckage as its own, and just shows how nature will always adapt to its surroundings, even when a man-made structure is dumped within it.

Australia is famous for its large proportion of the world’s most venomous creatures, and in Kuranda there is a Venom Zoo. I passed it by on my way to a walking track that would lead me through the rainforest of Jumrum Creek Conservation Park. I was totally in love with the rainforest here. I secretly hoped to stumble across a Cassowary, one of Australia’s large flightless birds. This was the part of the country where they could be found, but unfortunately they are an endangered species, so it would be pure luck if I saw one. Following a boardwalk, even though the streets of Kuranda were never far away, the vegetation was so dense that I felt like I was deep within the rainforest. An avid bird watcher, there was plenty of life flitting and singing amongst the trees to keep me occupied, and I took my time meandering down to the bank of the Barron river. 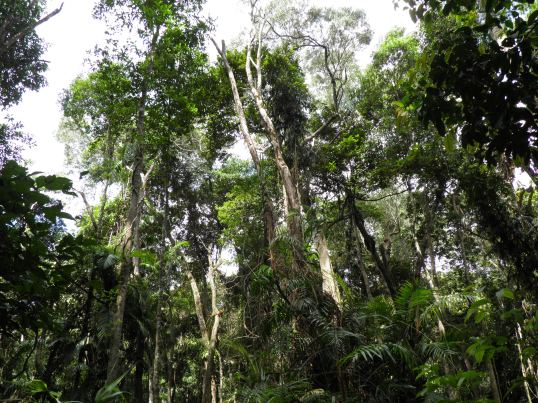 When I’d left the skyrail station behind on arrival, I had seen a sign advertising a river cruise. I hadn’t been going to bother, but now, realising I had enough time, I followed the river walkway upriver, under the cableway and round the bend till I found myself at the small boat tied up on the bank. There was just a small group of us on board, and amusingly a pair of swallows had built a nest amongst the lifejackets that hung from the boat’s roof. The birds flitted around the boat and above our head as we both idled at the bank of the river and cruised slowly along the water.

On the opposite bank of the river we passed the still form of a freshwater crocodile that was sunning itself on a rock. Much smaller than their saltwater equivalents, the locals deem these guys safe enough to get in the water with, the boat driver telling us that the locals swim in the river here amongst them. They might be small, but they still have a good set of teeth on them, so I’m not sure how comfortable I would have been with swimming there. In a little bay just past the croc, was a plethora of turtles. Initially hidden but coming to the surface in a feeding frenzy, there were also a lot of decent sized fish here, and we idled for a while near the bank watching the turtles and fish in the murky water.

We could see a good way down the river from here, and it was a pleasant cruise downstream and underneath the cableway. We spied two more crocodiles and more turtles, and the driver told us about a male cassowary that was sitting on its nest just a short walk into the bush. I would have loved to have gone to see it, but this was when they were at their most dangerous, the male being very defensive when they are brooding. Between the changing view of the rainforest as we drifted along the river, the flitting of the birds around us and the crocodile spotting, it turned out to be a very enjoyable spur-of-the-moment addition to the day’s excursion. 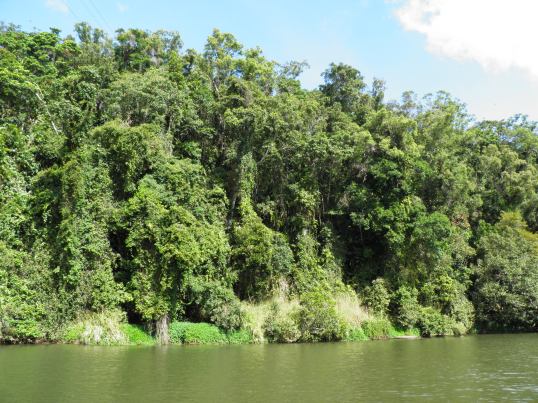 By the time we returned to the river bank to disembark, it was time to make the short walk to the train station to board the scenic rail back to Cairns. Unlike the Skyrail, the train was packed, and although I was lucky enough to get a window seat, the windows were compact and awkward to look out of. I also was hemmed in by young children who wouldn’t sit still, and the general vibe from several of the people around me was one of disappointment. I could hear people grumbling about how cramped the train was, and how poor their view was, which considering it was supposed to be a scenic train ride, was a little disheartening. 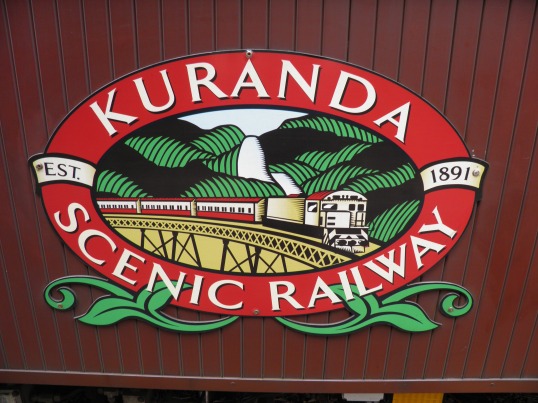 Despite this there were some incredible views where gaps in the vegetation allowed. We stopped at the Barron Falls lookout which provided a view of the falls from the opposite side of the gorge to the cableway. Overall, it was a downhill meander, in and out of the bush, and eventually crossing the flat plain back to Cairns. The whole journey took around an hour, and although it was nice to have done both journeys, the Skyrail was by far the better experience. It had been an incredible day, and I was a little sad to be back in the banality of Cairns. Thankfully I had another excursion away from the city lined up for the next morning. 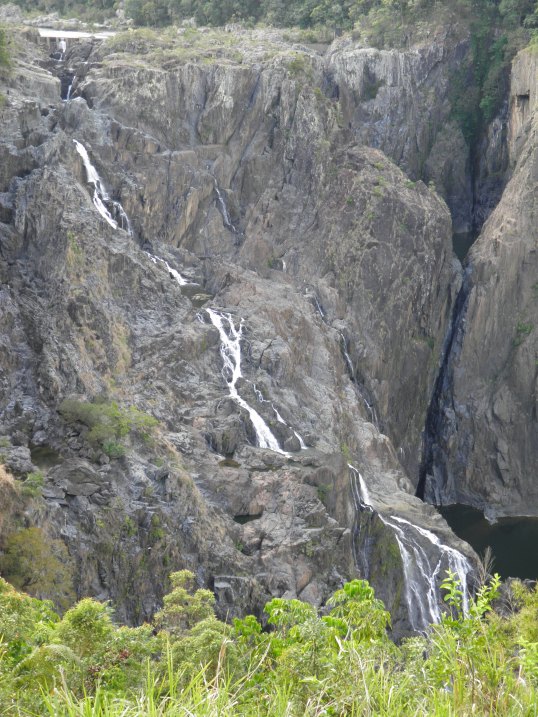 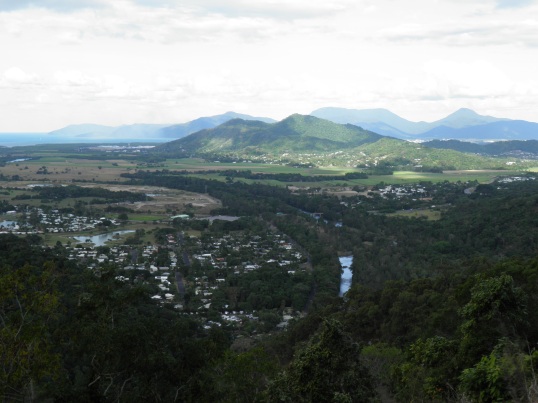 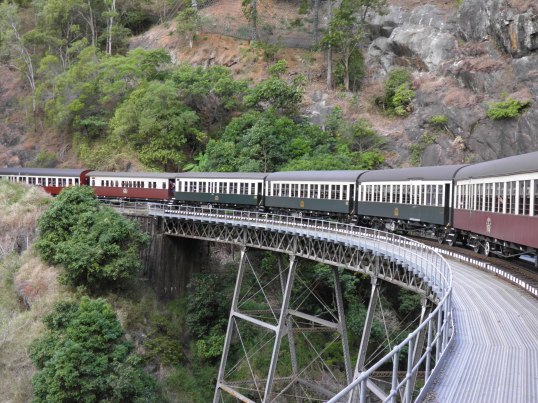