Archive for the tag “ski”

In Search of Snow

It’s been a relatively mild winter in New Zealand this year with barely any snow where I live and the local ski-fields have had intermittent falls interspersed with strong winds and unusually warm weather, resulting in a poor ski season. I’m a summer-loving person, but back in my native Scotland, the one thing that made the cold, dark winter days and nights bearable was the promise of snow, and lots of it. I love snow, and in Aberdeen where I used to live, we got plenty of it. It wasn’t unusual to get an autumnal blizzard that would dump the first snow of the season in October, and often into November, but the main snow months were January and February. In one epic year, we had snow every month from October through to May, and then it started again in October. The ski centres still had plenty of snow on the longest day of the year in June, and with the most northern ski-field having daylight till around 11pm, it was an epic day to hit the slopes.

Moving to New Zealand was the right thing for me to do for so many reasons, but boy do I miss snow. I never thought I would, but after three winters here with so little reward for the colder temperatures of the season, I’ve found myself staring jealously at the distant Southern Alps with their white tips and yearning to feel snowflakes fluttering down on me, craving the glorious silence that only a snowfall can bring and dreaming of first footprints on a fresh bed of snow. Clearly my desires were becoming more vocal than I realised, because despite not being a skier, my partner insisted on taking me to the mountains to visit one of our nearest ski-fields.

Not quite an hour and a half from Christchurch is Mt Hutt (2086m/6843ft). The nearest settlement is Methven which has a scattering of cheap digs, bars and ski-hire shops – all you could ever need for the perfect weekend trip. From the base of the mountain, it is a long and winding drive up a gravel road that overlooks the vast flatness of the Canterbury Plains. The tall mountains are a stark contrast to the flat barrenness below and they stand tall against the horizon from some distance away. On that particular day, the snowline was roughly half-way up, although it was patchy and stale. Even at the level of the ski centre, there was plenty of rock face peering through the thicker banks of snow. We were lucky enough to find a parking spot at the top car park and we got out to soak up the view. My partner looked at me as if to say ‘Ta da!‘ and then couldn’t understand my disappointment. Don’t get me wrong, the view was stunning: with patches of sunshine making the snow on the surrounding range glisten, and with the snow-topped range flanking the nearby plains, it was a stunning vista. But the snow was not powdery under foot, it was stale and crusty. There was no fresh flurry of snowflakes falling on my skin, and apart from the buzz of the skiers and snowboarders enveloping me, I wasn’t feeling the vibe that fresh snow brings. It was better than nothing but I struggled to hide my disappointment. 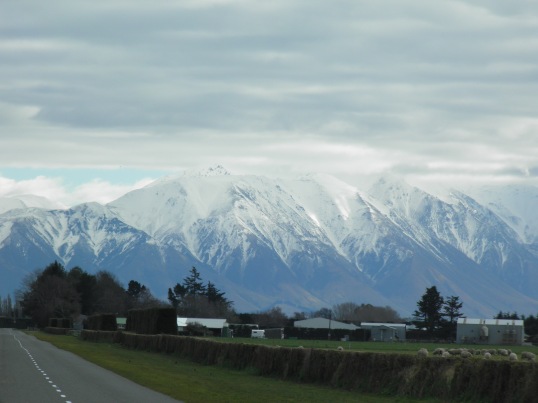 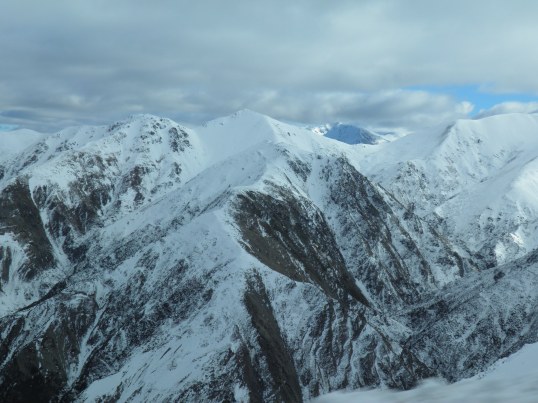 We stayed for a while, and watched the people whizzing down the mountainside, enjoyed some warm drinks in the cafe and then wandered around the car park watching 6 cheeky keas (the world’s only alpine parrot, and one of my most favourite birds in New Zealand) taunt each other and hop from vehicle to vehicle looking for trouble. Like all parrots, keas are highly intelligent and probably the most mischievous of all the parrots that I have seen. They thrive round people, and are notorious in parts of the country for removing the seal round car windows, and bending aerials and puncturing bike tyres. Needless to say I love them. I could have watched them all day, especially the two that were playing (or fighting, or mating, or whatever they were doing) with each other, one lying submissive on its back for the other who mobbed it open-winged, displaying its bright orange under-plummage. A couple of hours after we arrived, we set off back down the mountain and home. 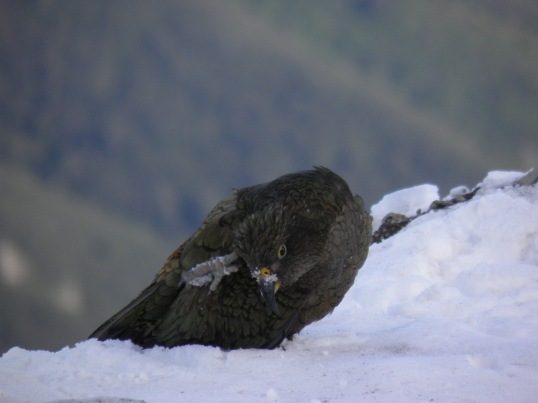 The following weekend, my partner’s friend came to visit from Auckland. He hadn’t skied for some years, and my partner was wanting to get a bit of snowboarding in this winter, so we set off back to Methven only to hit gale force winds, sandstorms, and then torrential rain. The road to the ski-field had been closed for nearly a week due to high winds, and arriving in Methven at lunchtime, there was nothing to do and nowhere to go but to camp out in the pub or our lodge. There were hopes of fresh snow being dumped in the night so we clung to the hope of the road being open in the morning. I had originally planned on taking a skiing lesson whilst the boys hit the slopes but having obtained a horrendous cough, I was slightly spaced out on the prescription-strength cough suppressants and it was easy for me to sleep the afternoon away. I didn’t miss much – the torrential rain continued all through the night. 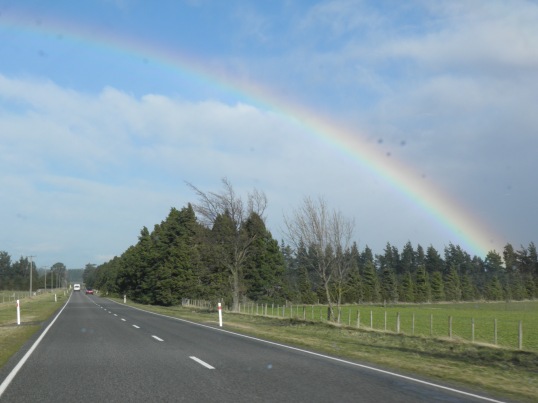 On the Sunday morning, we awoke to the news that the road to Mt Hutt ski-field was open to 4-wheel drives and 2-wheel drives with chains fitted. We gathered the hired gear and set off in our 4-wheel drive early. It was clear from the start that this would be a totally different experience than the weekend before: it was still overcast and raining in Methven and as we started the long wind up the mountain road, the rain became sleet and then snow. The snow became heavier the higher we climbed, and the visibility grew poorer and poorer. The surrounding mountains that had glistened last week were nowhere to be seen through the clouds, and the snow on the road grew denser as we travelled. Like many mountain roads to ski-fields, there is often a long drop down so they are definitely not the kind of road you want to lose control of your vehicle on. But as our altitude increased, so did the snow on the road, and eventually even our 4-wheel drive decided to lose traction after coming round a bend. The procession of cars grew slower and slower until we rolled into the top car park in by now quite thick snow, and parked up one by one. I got out as quickly as possible to see and smell and feel the snow flakes falling down on us. Shortly after our arrival, they closed the road to all traffic except chained 4-wheel drives, and we faced a possible reality of being stranded up the mountain as conditions worsened. After an hour of waiting for news on the likelihood of us getting back home that day, we could finally go off and enjoy ourselves. The boys bought their passes and headed off and I hung around the base, taking photos of them through the incessant snow fall and just generally breathing in the snowy scene. 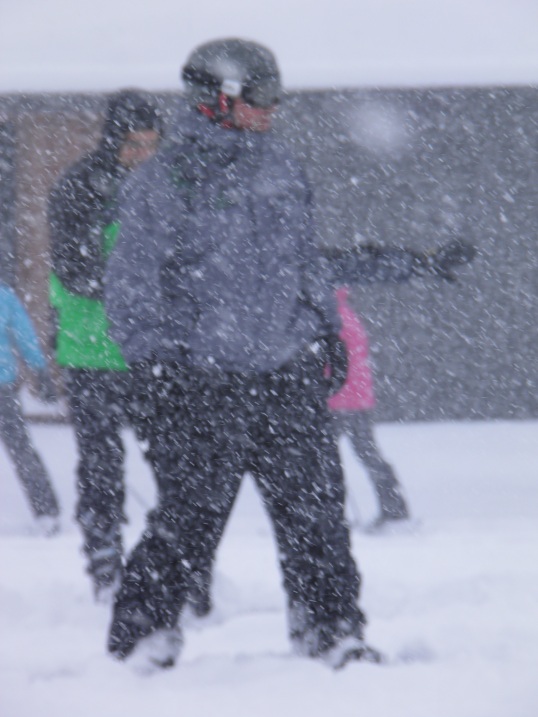 There is nothing like the silence of snow. Anybody who has stood outside during a heavy snow fall should know what I mean. Birds are silent, and most other sounds grow distant or still (not to mention the scientific reasons that snow covered ground absorbs sound waves and falling snow causes sound waves to curve upwards towards the sky – but that’s not quite as poetic and romantic, is it?). I love that silence and stood happily enveloped by it, watching nearby kids throwing snowballs whilst I looked for an untouched patch to place those first footprints. A 360 degree wonderland of fresh powder snow and I breathed in memories of Scotland. For those hours that we were up there, I couldn’t have felt happier. My toes and fingers grew uncomfortably cold but I didn’t want to go anywhere. For that brief moment in time, I was home. 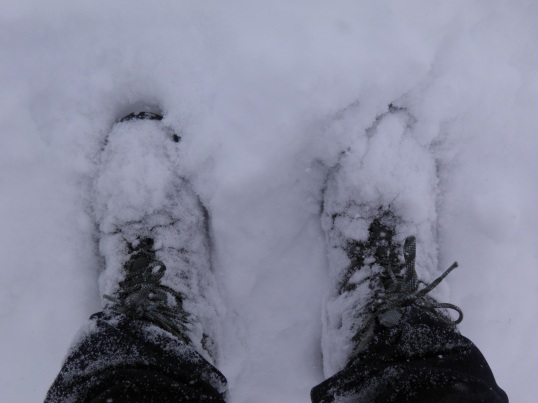