No Kiwis in Queenstown

I’ve never made a secret of the fact that I’m not a great fan of Queenstown, New Zealand’s adventure mecca in the South Island. Don’t get me wrong, the place definitely has its virtues: after all it sits by a massive lake flanked by mountains so there’s definitely beauty and outdoor adventures on its doorstep. But the town itself does not enthrall me, being targeted towards garnering the tourist buck, and too busy for my liking (and heaven help you if you want to park anywhere!). So whilst I wouldn’t say no to a visit there, it’s not a place I feel the need to rush off to on a regular basis. Having not visited for sometime though, when I noticed in January 2017 that flights to Queenstown for Christmas 2017 were dirt cheap, I took the opportunity to book a long weekend away there. Then in February 2017 my brother announced he was flying over to visit me in November 2017 and wanted to do a road trip, and so when that Christmas break came round, I found myself in Queenstown just 5 weeks after I’d been there with him.

After finishing work for the day, I headed to the airport for an afternoon flight south from Christchurch. Queenstown airport was packed and it took a while to get the travel pass that would allow me to use the local bus network. The bus network had only been overhauled in the weeks running up to this visit and now there was a convenient and cheap bus service into town from the airport at neighbouring Frankton. It dropped me off almost opposite the hostel I was staying at which was just back from the lakefront and I checked myself into a private room. It was a nice afternoon so I didn’t take long to head back outside and wander along the promenade on the shore of Lake Wakatipu. These days, Queenstown is busy year round, but being the Christmas weekend it was especially busy. I didn’t hear a single Kiwi accent though, with tourists everywhere. Even the shops and eateries seemed to be staffed by travellers. It felt like the locals had abandoned the place and up and left, and in some respects I couldn’t blame them. It does feel a little bit like a tourist town run by tourists for tourists.

It was warm enough to have a little paddle in the water and I took my time meandering. At the beach, I found a spot to myself and sat down, ready to do a bit of people watching. Within minutes, a guy joined me and started chatting away. I’m a very introverted person and enjoy my solitude. I also enjoy watching the world go by at times without actually taking part in its goings on (which is why I prefer countryside and quiet places over thriving cities and large groups), so I was initially reluctant to engage too much, but eventually his persistence wore me down and I found myself passing quite a bit of time chatting. He too was travelling solo and was just looking for some company, and I had nowhere particular to be.

After a while, we parted ways, and I took a wander along the beach for a bit before turning back and heading to Fergburger, the town’s famous burger joint. Both because of its popularity as well as the increasing tourist numbers to the place, it often has a line so long as to be off-putting. My brother hadn’t wanted to join the queue whilst we had visited in November, but I was prepared to wait, and wait I did. I started quite a bit of the way up the street, and queued for about 40 minutes to get to the head of the line. Then it was about a 20 minute wait to get the food, but I knew that what was coming was worth the wait. I also always have to make at least one trip to Patagonia, the ice cream and chocolate shop, when I visit Queenstown, so I got dessert and ate it on the way back to the hostel. I’d spent the last few weeks doing a distance learning course at university, so I had to sit my last assessment online that night before retiring to bed.

The following day was Christmas Eve, and with this to be the best day of the long weekend for weather, I slogged my way up to the summit of Ben Lomond. I returned via the Gondola building where I caught my breath a little over looking the lake and town below. By the time I hiked down to the town via the Tiki trail, things were starting to close up and it took quite a bit of wandering to find somewhere open to grab some takeaway. My partner was working over the Christmas holiday which was why I was on my own. I didn’t so much mind that day, but this was to be the first time I’d spent Christmas day on my own in about a decade. Even on Christmas Eve, all I could see around me were families and friends. I might be an introvert, but sometimes even I can get a little lonely.

I woke to torrential rain on Christmas morning. In the hostel kitchen, a large group of friends were having a party, so after eating, I retreated to my room and read a magazine. Before I knew it, I had fallen asleep and when I awoke, it was dry and the morning was gone. By the time I forced myself to go outside, the sky was blue and the clouds were dissipating and suddenly it was a glorious Southern Hemisphere sunny day. People were out having picnics and being social and relaxing everywhere. The green spaces and beach were covered in people chilling out. Kids paddled in the water, and there was a man on a jet pack performing in the lake nearby. I could see a crowd of people on the main beach in town and it turned out that the backpacker buses had got together and arranged a backpackers party on the beach. The numbers increased as time wore on and I could see santa hats mingled with bikinis and rubber rings and floaties on the water as the party spilled over into the lake. I bypassed them to reach the Botanic Gardens. 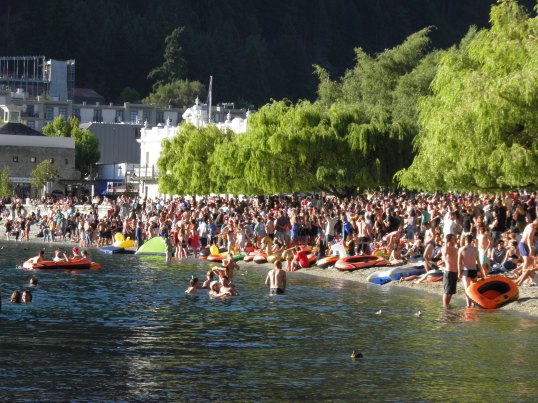 The TSS Earnslaw made its regular passage to and from the waterfront, and I joined the steady stream of people out for a stroll along the foreshore. The clouds never fully retreated but the sunshine was still able to beat down for the most part and after soaking up the views and listening to the music drift on the wind, I found myself at the far end of the peninsula, stepping down onto some rocks and duly falling asleep. It’s rare for me to be lazy when I’m way from home, so it was a nice change to just doze under the sun and rest up after the previous day’s exertion. When it eventually grew cooler, I continued round the peninsula and cut up to the gardens, wandering around the blooms before eventually cutting back to the beach where the backpacker party was still in full swing. Taking my time to return to the hostel, it was soon time to enjoy my Christmas platter and wine. 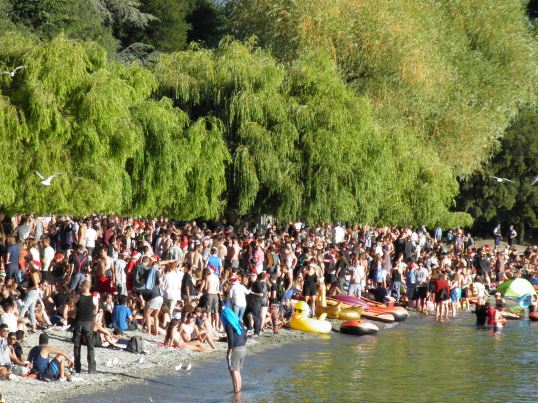 Boxing Day was a rather moody day with a bit of wind and clouds in the air. The beach seemed so quiet compared to the day before but the streets and eateries were bustling. I found a table in a cafe away from the lake and enjoyed a tasty brunch before wandering around the crammed shops with their Boxing Day sales, and back to the lakefront where I hovered for a while. The sun had returned and people were spilling out on the streets as the hours passed. Eventually it was time to head back to the airport and return north to Christchurch and work the next day. I may find the town’s crowds a little suffocating, but I had achieved a summit that I had wanted to hike for some time, and I’d also caught up on some much needed relaxation, so perhaps the place can’t be all that bad really. 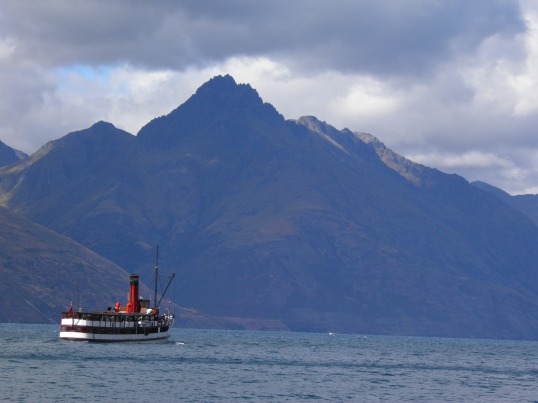